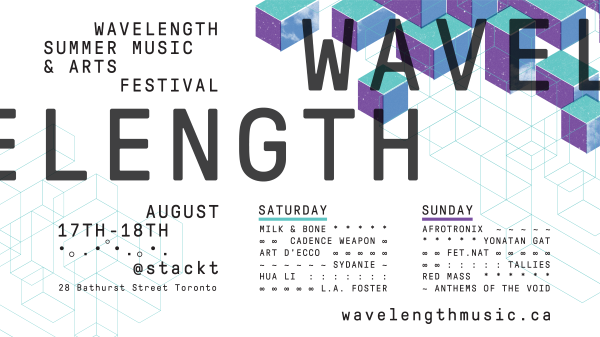 Joining Wavelength’s latest release of musical names is Toronto-based music industry executive and writer Ian Steaman, who has been announced as this year’s guest curator.

“Wavelength has a long history of being on the cutting edge of music discovery and promotion, curating live events featuring some of the best new progressive, alternative, experimental and underground music out,” says Steaman. “I’ve had a similar passion for doing the same throughout my career and was honored to be asked to come on board to share that passion as guest curator of their artistic and educational programming. As music, live and recorded, continues to evolve and grow, I look forward to bringing my vision for where it’s headed in the future to Wavelength’s programming over the next 12 months.”

While the main music and comedy stages (comedians and artists to be announced July 30) will be inside the weather-protected and air-conditioned Belgian Moon Brewery, there will be plenty of art and activities around the market. Easily accessible by transit, bicycle or on foot, Wavelength 2019 will be a hidden oasis of music, art and community within Toronto’s newest creativity hub.

Doors open at 5 p.m. each day (Saturday, August 17 & Sunday, August 18) with a curfew at Midnight. Attendees must be age of majority and have a Festival wristband to enter the main stage venue space. Full details are available at wavelengthmusic.ca