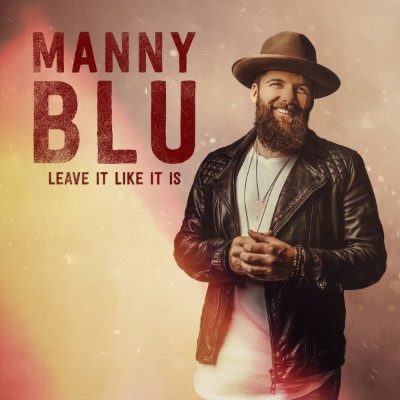 Manny Blu has now released his debut EP Leave It Like It Is, which is a collection of summer-ready anthems. Blu recently debuted some of his music and cultivated new fans on the Hit After Hit Tour with Canadian country music legends George Canyon, Doc Walker, and Charlie Major this past spring. Blu is now bringing his collection of toe-tapping tracks to fans just in time for the warmer weather.

“Finally being able to share my first full EP is really exciting,” explains Blu. “The responses I’ve gotten from the singles so far has been beyond incredible and I can’t wait for everyone to hear the entire EP when I hit the road this fall.”

Blu’s debut EP will bring together seven tracks including his first two singles; “X On My Heart” and “Looking Forward To Looking Back.” Blu has been inspired by the sounds of everything from B.B. King to Tim McGraw. The Montreal native, now Nashville transplant is bringing his own sound to modern country music with the launch of Leave It Like It Is. With brand new tracks like “11:59” that pay tribute to the songs that sparked Blu’s love of country music, bringing him back to those summer nights, hanging out with friends and listening to country, where this journey began and other songs such as “Playback” showcase Blu’s passion for genres outside the country music realm, and draw inspiration from the pop-world and the likes of bands like Maroon 5.

Leave It Like It Is is a testament to Blu’s ability to hone his craft as a young country artist. Filled with heart, soul and get-up-and-dance grooves, Blu’s debut EP will pave the way for the upcoming tour season and leave his personal stamp on country music. Blu recently just celebrated his EP release at True Music Room and Bar in Nashville and kicked off a weekend of celebration for CMA Fest in Nashville. Blu has also announced the Leave It Like It Is Tour, which will be his first cross-country headlining Canadian tour stopping at Fall Fairs and Frosh Weeks throughout Ontario this September/October with more dates to be added.

Related ItemsCanadiancountryLeave It Like It IsManny Blu
← Previous Story Weekly Beat Down – July 8, 2019 to July 13, 2019
Next Story → James Barker Band returns with their sophomore EP, Singles Only