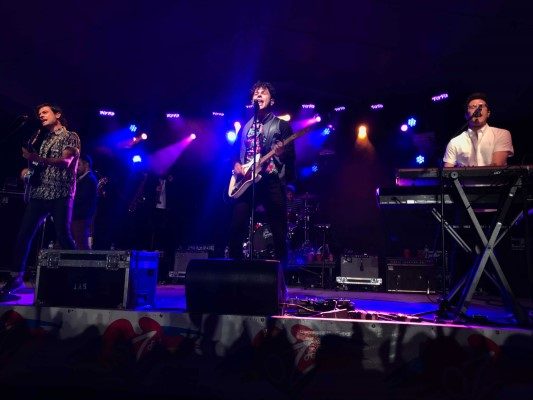 Newfoundland prides itself for many things – the friendly people, beautiful scenery, our dialect, our knack for storytelling, and the list goes on. However, George Street has a reputation of its own; one being “The Biggest Little Street in North America” and all the patrons of the street know how to have a good time.

June 30th was no exception, as the Canada Day festivities commenced. Each year on George Street one can discover (and partake in) Canada’s Big Birthday Bash. Just like during the well-known George Street Festival, the street is closed to the general public as music-lovers and party-goers alike join together for some great musical entertainment.

The opening act is usually local and this year was no exception with Newspaper Fashion Show. Newspaper Fashion Show is an Alternative Rock band based out of St. John’s, NL. Jacob Quinton (Vocals & Guitar), Jeremy Gillam (Lead Guitar), John Purchase (Keyboard & Guitar), Arron Beswick (Bass & Keyboard) and Zakk Sullivan (Percussion) create this five-piece indie band that is said to “bring high-energy performances to the stage while still keeping lyricism and songwriting at the forefront of their creative process.” (MusicNL Profile)

This was my first time seeing the band, although I had heard their name floating around our local scene for a while. They began their set with ‘Another Thing Coming’, a track from their 2017 release A Rope Against the Sun. With a little extra musical introduction, Newspaper Fashion Show was able to solidify capturing the audience’s attention as they set the mood for the night. They continued to play tracks from the album including ‘Wasted Away’ and the set closer, ‘So Far Apart’. They also teased of an upcoming new album (set to release August 10th) and played a few sneak peeks of tracks (including the albums titled track) that have never been performed live. The patrons of George Street got some extra special music, and their longtime fans got to experience something exciting.

Overall Newspaper Fashion Show put off a great set! They captivated the audience; who bounced along to many of their high-energy tracks. I would definitely be interested in seeing them again!

Next up was Hannah Georgas, a Pop/Rock singer-songwriter based in Vancouver, British Columbia (originally from Ontario). From the way the audience reacted you could definitely sense that Georgas was no stranger to Newfoundland (having played here in the past with Hey Rosetta).

Georgas has a pretty impressive resume, which includes multiple albums and award nominations. One could clearly see the talent that she has been graced with. She has a great stage presence, with trying to generate energy and good vibes. She definitely brought some uniqueness to the night’s lineup. Her set began with ‘Elephant’, a track with a unique sound that embodies the creativity of Georgas. With only six songs encompassing her set, Georgas belted out ‘Don’t Go’, ‘Crazy Sh*t’, ‘Waiting Game’ and ‘Waste’ showcasing her powerful voice. Finishing up with ‘Enemies’, I can safely say Georgas has gained more fans. (We had met a couple of travelers who asked if she was a local act because of the cheering from the audience).

And finally, The Arkells. The Arkells are a rock band from Hamilton, Ontario composed of Max Kerman, Mike DeAngelis, Nick Dika, Tim Oxford, and Anthony Carone. The Arkells have a solid fan base here, many of which have been following them since their Jackson Square days.

The patrons of George Street could definitely feel the anticipation as the band graced the stage and began the first number ‘Hand Me Downs’ from their most recent album Rally Cry. They followed this up by a crowd favorite, ‘Leather Jacket’ from 2014s High Noon, as everyone broke into song along with Kerman. They followed right into ‘Michigan Left’ from the 2011 album of the same name. One of the things I enjoy most about their shows is the wide variety of tracks that encompass their set list, showcasing fan favorites from most albums.

The night continued with tracks such as ‘John Lennon’ (from their Jackson Square days), ‘Never Thought That This Would Happen’, ‘Show Me Don’t Tell Me’, ‘Eyes On The Prize’, ‘American Screams’, ‘People’s Champ’, ‘Private School’, ‘Come To Light’, ‘Only For A Moment’, ‘On Paper’, ‘11:11’, ‘Saturday Night’, ‘Whistleblower’, ‘Knocking At The Door’, ‘Oh Canada’, ‘Relentless’ and  ‘Dancing Queen (Cover)’.

Last time The Arkells played George Street (George Street Festival 2018), they presented a ‘People’s Champ’ award to Hasan Hai. I’ve seen them in the past invite people from the audience to get up on stage and play with them. There is always some form of extra special audience interaction. This night was no different as they had their request line. Around the middle of the show, Kerman brings out a phone. We won’t say where this phone came from but if you follow their social media accounts, you’ve probably already figured this one out. From this, a recording was played from the request line asking them to play ‘And Then Some’

The Arkells put off an amazing show, there is no doubt about it. Their stage presence is next to none. Their interaction with the audience keeps everyone intrigued and wonder what will happen next (especially when Kerman starts a conga line!). The addition of the Northern Soul Horns added that little extra special touch to the sound. I was a little surprised that they did not collaborate with the opening acts to perform a song during their encore. This was something I’ve commonly seen during their shows. This was something we realized after the fact so it definitely did not take away from the show.

It would not have been an Arkells show if they didn’t finish their set with ‘My Heart Is Always Yours’. To me, this is the perfect track to end the night, with the promise of returning. I’m already anxiously awaiting the next show!