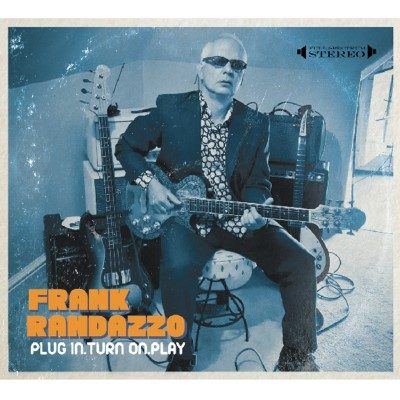 The eleven-track instrumental album will please fans of Rock, Blues, and Psychedelia. Check it out below and find out more about Frank in our Five Questions With segment.

Hi, my name is Frank Randazzo, best known on the Canadian music scene as bassist for the Juno Award Winners (most promising group) The Leslie Spit Tree-o. I was born and raised in downtown Toronto, in the Little Italy neighborhood. Inspired by my late Father’s Italian Folk music and my older sibling’s vinyl collection, I started gigging around the city at age fifteen and haven’t stopped since. I played in various bands for years including High Noon, Mask Era, Wayward Angel’s and Kenny Brown and the Pervaders, honing my chops on guitar and bass, leading up to my solo effort, Plug In, Turn on, Play.

Since I have played all the instruments, except drums and percussion, I am working on putting a band together to perform, so at the moment no shows are scheduled.

The song I would choose from my solo recording would be Cat Walk Part 1.

My current favourite Canadian Artists are The Trews, Arcade Fire and July Talk.