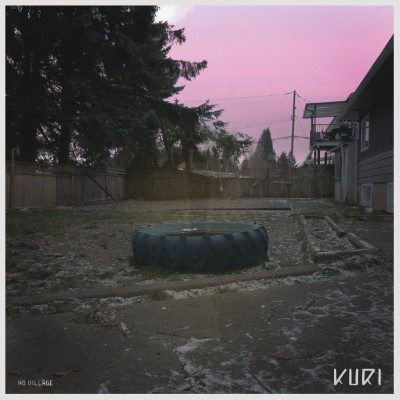 Singer-songwriter KURI has been finding influences everywhere which inspired his debut album No Village, released at the beginning of June. He says that every instrument has a story and he wants to tell that story in the only way he knows how.

The opening track “The Great Orator” (which was lead into with a quick instrumental opening track) starts off with a great piano tone, with KURI’s voice blending well into it. Later in the song, you can hear the instruments KURI has mentioned, bass, violin, and drums, just to name a few, all telling their stories in the background, blending perfectly with the lyrics.

“Sort Sol” was the first single released from this album. It has an even flow throughout the song, with a very rhythmic drum beat fusing amazing with KURI’s very unique sounding voice. The multi-voice track towards the end of the song is haunting but encouraging especially with the great mix of instruments involved.

“Walk On The Moon” has some of the most beautiful acoustic guitar I’ve heard. It’s the kind of song that can instantly relax a person and change a mood in seconds, again, thanks to KURI’s great voice and amazing skills with an instrument. It gets even better once the strings come in that make you feel so good inside.

“At One Fell Swoop” is an emotional ride. Starting with the strings I mentioned previously, mixing perfectly with KURI’s voice and lyrics is enough to give anyone chills. The range KURI has in this song just shows the growing sounds he can produce, with the quivers you can hear in his voice with pure passion he has throughout the songs.

For a debut album, this will set you on a ride of emotion. Get ready to feel so many different emotions throughout and gain an album you can play at any time you want to get away from everything.