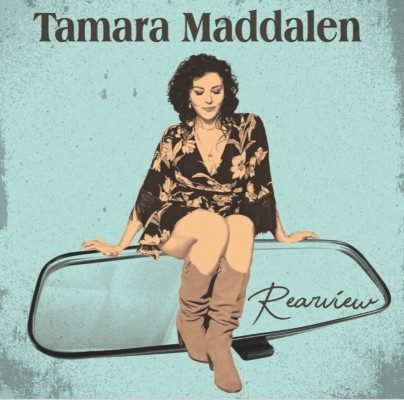 Canadian singer-songwriter Tamara Maddalen recently released the video for her single, “Rearview”, which is the second single from her upcoming full-length album, Mint Green Mercury. The video was directed by Michael Penney, who also directed her “Fade Away” video which was released in May. Along with country road scenes shot around Dundas, Ontario, the video includes a studio performance at B-Town Sound in Burlington, where Maddalen has been recording the album with producer/engineer Justin Koop.

Check out the video below and find out more about Tamara in our Five Questions With segment.

Hello music world….so happy for this chance to finally get to speak with you…..I’ve been waiting a long time.  I’ve got a lot to say, well sing really.  The last 10 years packaged neatly in a 13-song bundle. I hope you love the listening journey as much as I loved creating it.  It’s loaded with love and honesty all the passion I could muster.  Even tonight as my Music Producer Justin Koop and I finalized the order of the tracks for the LP I had you all in mind.  Thank you for listening, thank you for existing so that I too can exist. “I’ve been standing still for far too long” – Rearview

Definitely, my creative style is reflective and mines from past experiences, life is art and art is life and this is true for my songwriting.  The music has evolved over time, I’ve become more experimental instrumentally with the production of each album but at the core are the basic music ropes I rely on time and time again.  That never changes, it’s rooted in good ol’ rock and roll, R&B, country and pop fundamentals that allow exploration.  Lyrically I touch on the collection of experiences and what I’m living in any given moment which then becomes like a soundtrack to my life really. I like to be a little clever with lyrics and poke fun at life because life is funny sometimes.  There is growth over the last three records certainly, but it’s still about honest songwriting and storytelling drawn from Truth.  It’s what resonates with me and what connects me with from other artists who inspire me to write as I do.

My next performance will be on July 4th, 2019 presented by B Town Sound in Burlington Ontario, this will be a Live Stream event starting at 7:30 PM and I am looking forward to showcasing some of the new songs off the upcoming album Mint Green Mercury and performing stripped-down acoustic versions.  I will be accompanied by the very talented Joe Parisien on Piano and Jeff Eager on Guitar. It’s staged to be an intimate experience for me as the performer and those tuning into the live stream. This is a first for me and I am so excited to explore this new way to connect with fans and the listening public.  It’s pretty amazing that anyone, anywhere can tune in and participate.  I’ve watched some great Live Streams myself of artists I admire and am really stoked to be able to incorporate this myself thanks to the suggestion of my team!

“Rearview” of course as its the latest single and video, but also because it is a fitting song for where I am in my life right now.

OOOOHHH got lots of those, let’s see…..

Frazey Ford, love me some of this girl, huge inspiration to me. Frazey has all the sensibilities of a Northern cross between Dolly Parton, Bettye Swann and Amy Winehouse (huge fan of all three) and her horn arrangements are SICK! What’s not to love about Frazey Ford?

Tomi Swick is a mega-talented songwriter whose style resonates with me.  It’s contemporary, dusty and swampy and feels like honey dripping from a comb.  Not to mention he’s a hard-working homegrown musician from neighboring Hamilton Ontario and one of the best live performers ever! It was actually Tomi’s last album The Yukon Hotel that lead me to B Town Sound so that’s a pretty cool connection, coincidentally we both have Aaron Goldstein playing Pedal Steel on our albums.

Some other amazing indie artists I dig are Royal Wood, Jadea Kelly, Amanda Rheaume, and this really gritty and soulful new band I’ve recently discovered called Bywater Call from Toronto.  There are just too many.  We Canadians make some beautiful music! Happy to be counted among that group, it’s a real privilege!