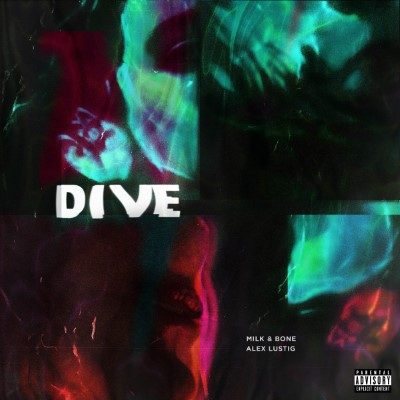 DIVE is the latest EP from Montreal based Milk & Bone. Coming off their success of winning Electronic Album of the year at this years Juno Awards for their album Deception Bay, DIVE is a great follow up with producer, Alex Lustig.

The EP starts strong with the lo-fi synth wave track “Ride or Die”. The track uses muted female vocals with a hard kicking backbeat to create a feeling of intimacy as well as danger. You can almost picture Milk & Bone in the passenger seat of a souped-up Mustang car on an electric boulevard, coaxing the listener to drive away with them – to “Ride or Die”.

The next track, “Peaches” takes us out of the city and onto the highway. As a contrast to the previous track, Peaches is a dreamy, upbeat synthpop song, with a jumping baseline and lots of candy imagery – definite summer jam material. What I particularly like about the track is that, though the lyrics at first listen seem saccharine, the closer you listen, the more you hear some great spice; for example, I loved the line “lemonade and fuzzy peaches, had enough of all these bitches.”

Following “Peaches”, our car seems to have detoured into the backstreets with the track “Vision. Color”. The track uses deep based sounds that are almost liquid sounding as if pulling the listener into the mud. The lyrics of this track are fearful and tense – as if our bid for freedom that started with “Ride or Die” finally hit a speed-bump. It’s a great contrast to the previous tracks, though would certainly stand well on its own merits as a dark electropop track.

DIVE ends gracefully with the hopeful track “Blue Dream”. The song starts as the female vocals, bolstered by simple synth cords, make a supplication to the “Blue Dream” to free them of the fears built upon in the previous track. After this ‘prayer,’ the “Blue Dream” starts to build on itself with more and more synth samples and layered beats till the track builds into an ethereal crescendo – as if we’re being pulled out of the mud of “Vison. Color.”  and into the atmosphere – hopefully leaving the listener satisfied with the journey they’ve taken: for its ups as well as downs. I know it did for me.