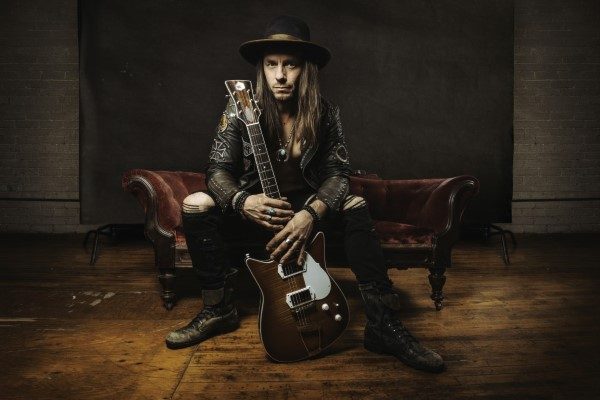 2019 is already a great year for Clayton Bellamy. Fresh off his tour to Australia with The Road Hammers, this Anthem / ole label group singer-songwriter and his band, The Congregation, released their single, “Resistorz” on May 24. It’s the second release from their muchly anticipated upcoming album, Welcome to the Congregation.

Bellamy is a founding member of the highly successful band, The Road Hammers, so success is not new to him. (His awards include a JUNO for Best Country Recording, five Canadian Country Music Association awards and SOCAN Songwriter of the Year.) But, he wanted to do something fresh, exciting and out of his wheelhouse, and that’s how Clayton Bellamy & The Congregation was born. He’s gone from country music with The Road Hammers to rock ’n’ roll with Clayton Bellamy & The Congregation.

I had a chance to catch up with Bellamy about his new single, his forthcoming album and what it means to be Clayton Bellamy from the beginning of his music career to now. This is what he had to say:

You’re part of a very successful country music band, The Road Hammers. What made you want to step away from them and go in the direction you have on your own? Why did you want to start fresh and when you started this process, what did set out to accomplish artistically?

I haven’t left The Road Hammers but I felt like I needed to do something different for a while. The last few years have been filled with change for me changes in my love life, changes in my location, changes in my emotional state. I really felt the need to shed my skin for lack of a better term. I needed to reinvent who Clayton Bellamy was as an artist and what that looked like. I needed to get back to the music I always loved and wanted to create when I first started playing. And, I needed to stretch myself creatively further than I had ever been before.

How excited are you to be a part of Clayton Bellamy & The Congregation and this new venture you’re on?

Seeing this project come to life is more exciting than anything I’ve been a part of. To hear people say that I have “found my music” makes me very happy.

Tell us what the “style” is that you have created for yourself and The Congregation?

This is what I call a Rock ’n’ Roll Tent Revival. It’s a mash-up of Rock, Blues, Gospel and RnB. It’s loud, it’s rowdy but it carries a message. Peace, Love and Rock ’n’ Roll.

“Resistorz” is your second single, available now via all digital streaming platforms from your upcoming album. Why did you choose this particular track as your second release and what makes it special to you?

This song speaks to me on several levels. But most importantly it carries a message of empowerment. It’s a call to arms for people to rise up against hate and against injustice that they see in the world today. Now more than ever we need to speak up and speak out and love louder than all of the chaos that is being fed to us. We need more Resistorz!

When can we expect the release of your new album? And, tell us about the journey that it took you on to bring this album to fruition.

The album will be released this September on Anthem Records. This process has been a long one because, like I said, I was starting from scratch creatively. Reinventing yourself is not an overnight process! My producer, Scott Baggett, and I spent two years writing and recording this album. And, everything about the process was different from the how we wrote the songs to having me play almost all the guitars and really make this project an extension of who I am right now.

With all of your experience in the industry – what would you say are a few of the things you’ve learned over the years that have helped your career maintain its longevity?

Never stop pushing outside of what you know. For years now I have hung my hat on this David Bowie quote and I think it really sums up how to remain relevant and creative in an ever-changing business like music.

“If you feel safe in the area you’re working in, you’re not working in the right area. Always go a little further into the water than you feel you’re capable of being in. Go a little bit out of your depth. And when you don’t feel that your feet are quite touching the bottom, you’re just about in the right place to do something exciting.” –David Bowie

For The Congregation, I was looking to a lot of classic records like Joe Cocker, Mad Dogs and Englishmen, Otis Redding, Black Crowes and Bad Company.

How has your music and writing style changed over your career?

I think I have really learned not to get in the way of the song, to really follow the Muse when she speaks and to listen to what she’s saying. The great songs write themselves you just need to know how to listen.

Last but not least, what’s next for Clayton Bellamy & The Congregation?

Next will be a European release in the fall alongside the record and then touring both in Canada and overseas. I am already writing towards another record, so I don’t expect to stop anytime soon!