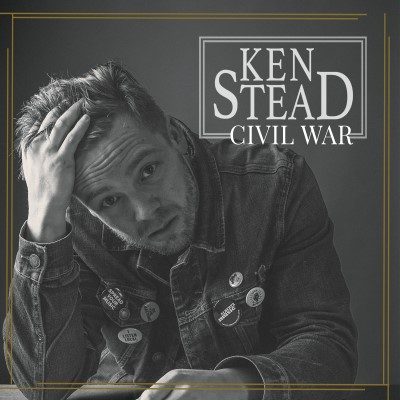 Civil War is the latest from Edmonton born, Calgary based artist, Ken Stead.

Civil War is a very energetic album with an easy going feel in the likes of Tom Petty or Ryan Adams. You get a real sense from the album that Ken and his band have been working together for a long time and have gotten themselves into a really well-honed groove that is the bedrock of that casual feel.

Through the use of electric guitar, drums, violin, piano, organ, and Ken Stead’s steady baritone, Civil War has a vigor and familiarity that would make it a perfect fit for a summer night barbecue with friends. The frequent use of strong hooks and relatable lyrics also makes Civil War a great album for a good sing along.

A standout track on the album for me was “Why You Afraid of the Dark” which uses simple organ chords as a backing and a sloping drum beat to make an almost gospel-like tone. The message of the sermon is pretty clear as well in “Why You Afraid of the Dark” because your fear is being misdirected at something not inherently scary? If so, maybe it’s as the song says, because you know that your shadow scares the hell out of you…and its time to fix your fears.