Five Questions With The Leanover 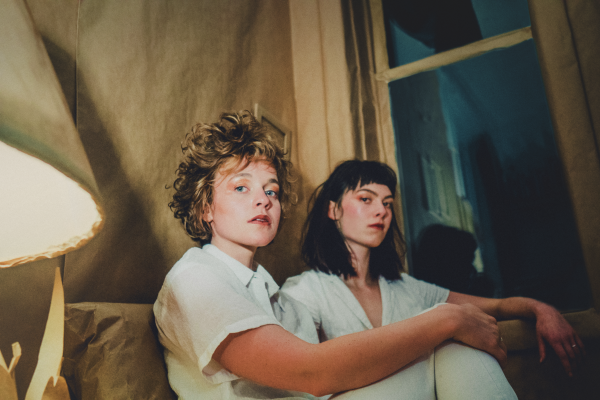 Montreal, QC-based dream groove band, The Leanover is made up of Ali Overing and Lou Seltz, as well as an international cast of supporting artists. The band formed back in 2016 in upstate New York before permanently relocating to Montreal. Currently, they are finishing a new album to be released July 31, 2019.

Check out their new single, “Lily” below and find out more about the band via our Five Questions With segment.

Howdy!  This is Ali and Lou of The Leanover.  We are a dream groove band based out of Montreal. We have a winding blockbuster of an origin story filled with international intrigue, star-crossed lovers, and a desire to make music for space cowgirls, but we think it might be too much to get into right now.

ALI: Well, when we first got started a couple of years ago, in university in New York, I had a stockpile of songs that I was itching to bring to life. At the time I was playing with my longtime pal and bandmate Sagiv on drums. He invited Lou to come play bass with us and even though she really didn’t have much experience (or maybe because she didn’t have much experience) she came up with these super unique, awesome melodic grooves that were like nothing I had heard before. She just took every one of my songs and put a new life in them. She and Sagiv also used to come up with these greats grooves together that I would decorate, and they collaborated on some lyrics as well. When Lou and I moved to Montreal after my great USA banning of 2017, we started writing new music together.  Now, songs either come out of a bass groove that she starts and I try to add some contrapuntal guitar riff to, or I’ll just show her all of the songs I’ve been writing and she’ll tell me which ones that she can imagine working for our band dynamic and which ones should be saved for my solo folkier project, Ali O. We’ve also been highly collaborative with other musicians and visual artists during our short but very nomadic existence, and it’s really contributed to our energy as a live band.

LOU: We’ve been keeping pretty quiet this season during the recording process but we are super excited to have our launch show for our new album Portico on July 31st! (At Diving Bell Social Club in Montreal).

I have a ton of fun performing with The Leanover! When we were playing with Erik Fines last year he always brought this incredible adrenaline energy to every performance. And then there’s Ali with her pretty shocking vocal powers and capricious stage presence, who throws herself completely into the narrative of the songs.

Ahh, that’s a tough one because the songs really each have their own moods, but since it’s the first single we’re releasing, it has to be Lily. It’s sweet and melancholic at first, but then it fills you with a nostalgic bounce by the end.

Andy Shauf, BADBADNOTGOOD are some of our contemporary national heroes. Here in Montreal, there are too many great bands to list but lately we’ve been listening to Thanya Iyer, Catbug, Dresser, Helene Barbier, and Emilie Khan, just to name a few.