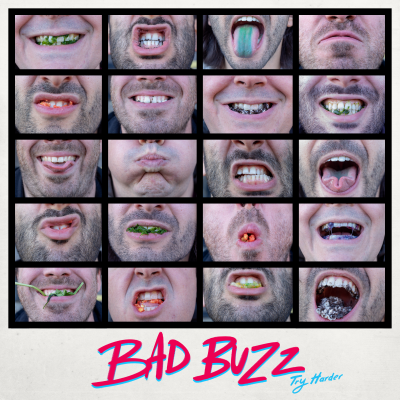 Following about two months of singles, Toronto punk band Bad Buzz has released their latest EP, Try Harder. The sophomore EP, following their 2017 debut album Far From Home, includes the four singles which they have been releasing biweekly since April 12th along with one additional track. Ultimately, Try Harder makes for an exciting addition to the band’s growing discography.

Kicking off with their first single, which was accompanied with a music video, “Talkin’ Shit” opens the EP with a strong melodic, pop-punk anthem that is sure to be a hit on the stage. Quite similarly, “Day And Night” continues to develop the EP with a bouncing swagger.

That being said, Bad Buzz shines brightest on the latter chunk of Try Harder. Between “If It’s Right”, “Under Attack”, and the previously unreleased “Hanging On”, the band seems to dig deeper into their punk roots, turning tones reminiscent of early Green Day, The Offspring, and Social Distortion through a modern pop-punk filter. “If It’s Right” is a heavy, almost grungy rock track which builds a wall of distorted and fuzzy guitars, that also features a fiery solo while “Under Attack” follows in a similar direction to deliver an exciting and dynamic example of songwriting. Opening with a lo-fi acoustic introduction, “Hanging On” closes out the album with a building, mellow, and reflective track.

All in all, Bad Buzz’s follow up EP, Try Harder, pushes the band forward from where they started on 2017’s Far From Home. As a whole, the five-track EP is very strong and, while firmly planted in pop punk, feels expansive in style and sound; ultimately making Try Harder a great step forward for Bad Buzz.