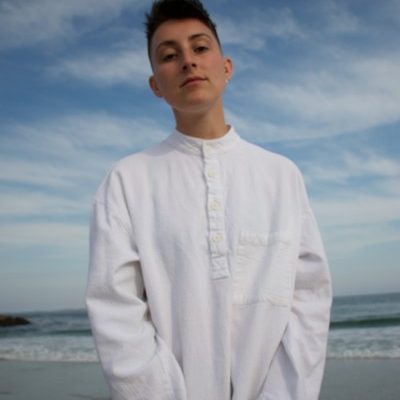 “GOLD COINS was written as a reminder to myself, to be wary of our society’s ideal that tells us that making lots of money makes you successful. We lose ourselves in this pursuit, we lose our loved ones, we lose our chance at life because we’re stuck in the idea that money is success. I’m fighting to reject this ideal every day, it’s part of who I’m trying not to be, but I get lost in it sometimes. To represent this internal battle in the video, I contrasted the FAMILY MAN shirt with the GUCCI shirt.

When the camera’s are ‘off’ I’m wearing a GUCCI shirt in an empty apartment, alone. Putting on a façade to show my followers that I’ve got a lot of money, therefor I’m successful and worth listening to. Even though in reality, I’m living in an empty space, with no one around. But when the camera’s are ‘on’, I’m wearing a Family Man shirt, I’m being recorded in ways that feel very human (with the natural movement of the cameras) singing in an emotional way in a humble space about our pursuit of money. Which version of me is genuine? Well the truth is they’re both genuine, because they’re both part of me. And although the Family Man is truer to who I really am, The GUCCI is still a part of me, and I’m trying to overcome it every day.”

Check out the video below, and be sure to connect with Kat no.ELLE via the socials listed.

I would love to! My name is Kat no.ELLE, I’m an artist and musician based in Halifax, Nova Scotia, and I’m a big lover. I take inspiration, for music and for life, from the ocean, my family and the shortcomings of society. I’ve been playing all types of music since I was a young kid, and I’ve been dreaming of being a performer since before I can remember. I’m deeply engaged in life, and I’m trying my best to create as many connections as I can before I’m gone, and I’ve chosen music as my method to do so.

My art is a way for me to process my emotions and ideas surrounding love and society. I struggle with the world we live in. I struggle with any structure that values money and power over human life and connection. I use music to struggle with these ideas, almost always in an emotional way. Obviously, there’s no solution to a lot of the world’s problems, but there are always actions we can take to put more love into the world. So I aim to challenge people to tune into their emotions, to question everything, and to feel good, so that they can take actions to put more love into the world. I don’t know, maybe I’m hopelessly optimistic, but I’ll tell you this philosophy makes for good writing material.

No upcoming shows at the moment! I’ve been recording non-stop. But if you want an idea of what a performance from me could look like, check out my live acoustic video. This is the most stripped down and vulnerable my music and performance can get. Also, I’ll be releasing the produced version of this track (GOLD COINS) at the beginning of July, so that’ll give you an idea of my sound, and will hopefully get you excited about shows when I start having them. Stay tuned!

It would be the video linked to this article!! It’s called Gold Coins (acoustic one-take) on YouTube. This is my first release, and I’m incredibly proud of it. What started as an idea I didn’t even think was possible, ended up as video that is more than I could have dreamed of.

Oh my goodness, there are way too many to name. I mean, the first Canadian artists who come to mind right now are all my favourite Torontonians. Charlotte Day Wilson, Daniel Caesar and Jessie Rayez to name a few. I’m also really excited about the people coming up in the hip hop scene there, like Sean Leon and Haviah Mighty. But nothing quite warms my heart like the people in the hip hop and R&B scene in Halifax right now – any artists under KekeBeats, Magic Mic, Zamani Miller, Jodi Upshaw, Owen O’Sound. And one of my favourite people in Halifax, Erin Costello, and her new sign Leanne Hoffman are on fire! Man, I could go on forever. I love and appreciate everyone in Canada making music right now.