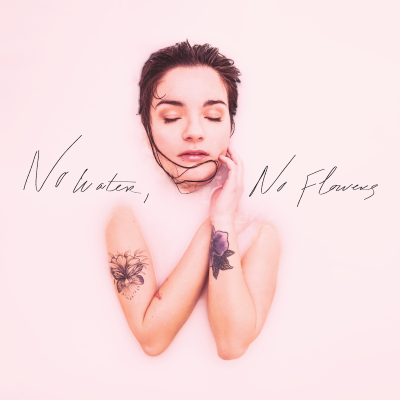 No Water, No Flowers is the first bi-lingual album from Montreal based artist, Geneviève Racette.

Overall, the tone of No Water, No Flowers is light and airy, yet grounded – like a bluebird’s song heard through the window on a spring day. The album is set to a slow tempo beat and features classical guitar, electric guitar, keyboard, banjo, and other classical instruments; but the cornerstone of ‘No Water, No Flowers’ is certainly Geneviève’s voice. The lead vocals of this songstress are songbird-like as sings both French and English with impressive natural grace and ease.

The themes of No Water, No Flowers fit well into the motif of nature: Lyrics about growth, love, birds, spring, wind, the stars, and of course, the album’s namesake, flowers. There is even a track about the passing of a friend; yet, the album’s ‘sad’ song has a cheer about it – a comfort in the natural cycle of life. If I had two words to describe the album overall, it would be ‘peaceful spring.’

A standout track on the album for me was “Parachute”. It may be that Geneviève had a particular person in mind when singing “Parachute”, but the intimacy of the lyrics and tone of the song make it sound like it was sung with direct intent for the listener – as if, as the lyrics, say Geneviève was ‘over lands and seas, through the grey and blue, [she is] a parachute’ just for us.