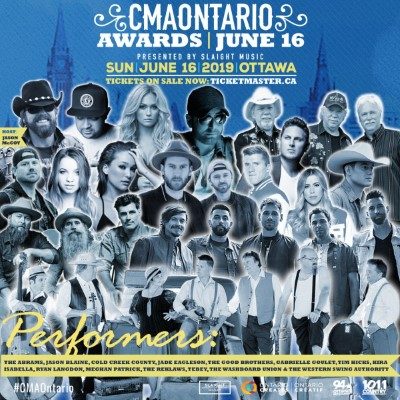 The Country Music Association of Ontario has announced a full weekend of activities to celebrate this year’s CMAOntario Festival and Awards taking place June 14-16, 2019 in Ottawa.

Culminating with the CMAOntario Awards on June 16th at the National Arts Centre, the weekend is set to feature a number of panels, as well as a series of free concerts along Downtown Ottawa’s Sparks Street featuring acts from across Ontario.

On June 14, the Fourth Stage at the National Arts Centre will present Songs and Stories: Songwriters in the Round.  Featuring Sudbury’s Andrew Hyatt, Vancouver’s Chris Buck, and Ottawa’s Kelly Prescott, and hosted by Mississauga’s Wendell Ferguson, the event will explore the stories and inspiration behind some of their biggest hits.

Following Songs and Stories, the Fourth Stage will feature two days learning, networking and mentoring with R2I (Road to Independence) TuneUp Conference.  On June 15 and 16, presentations will cover topics such as artist development and discovery, management and business practices, songwriting, digital marketing, promotion, funding and more.

The Fourth Stage will also feature the CMAOntario’s Legacy Revival on the afternoon of June 16, which will spotlight some of Ontario’s most treasured singer-songwriters; including Bobby Lalonde, Charlie Major, Gil Grand, Jamie Warren, Kelly Prescott, Randall Prescott, and Tracey Brown.

The weekend culminates with CMAOntario Awards Show at the National Arts Centre on June 16, with performances by Meghan Patrick, Tim Hicks, The Reklaws and a special guest performance by Vancouver’s The Washboard Union.

For tickets to all of the weekend programming, please be sure to visit cmaontario.ca.