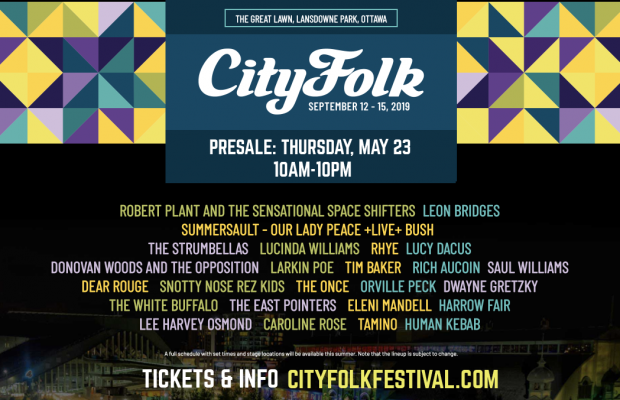 The 2019 Ottawa summer concert season is set to come to a legendary conclusion as CityFolk announces its 2019 lineup.

Thursday, September 12 is opening night of CityFolk. Expect to see the best of Americana to the Great Lawn at Lansdowne Park, with performances by Lucinda Williams, Larkin Poe and the Strumbellas.

Friday, September 13, children of the ’90s are in for a true treat as Our Lady Peace, Bush and +LIVE+ come together to bring Summersault back to the Ottawa stages after 20 years. They will be joined by Dear Rouge, Donovan Woods and the Opposition and Rich Aucoin.

CityFolk’s weekend line up begins Saturday, September 14, with a headlining performance from soul singer, Leon Bridges, with rapper Saul Williams, Polaris Prize nominees Snotty Nose Rez Kids and Newfoundland’s The Once bringing powerful performances during the day. Saturday will also see the return of Marvest to the surrounding Glebe neighbourhood.

Finally, exciting music fans across the Capital, CityFolk closes Robert Plant will bring the Sensational Space Shifters to the Great Lawn at Lansdowne Park on September 15.  The legendary voice behind Led Zeppelin’s greatest hits has been touring his latest album, Carry Fire.

Tickets for CityFolk are available at cityfolkfestival.com.