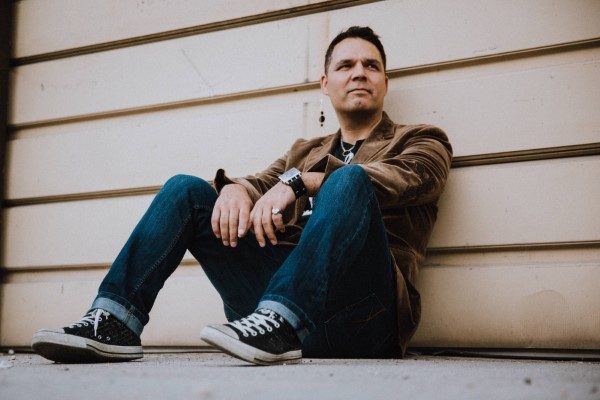 Award-winning Calgary, AB-based singer, songwriter, and producer Troy Kokol has released his new single, “Lightbulb” along with a video for the release. This is the second single from his second studio album, Lonely Ghost which was released in 2018, and earned him a nomination for the CBC Indigenous Music Award for Best Folk Album, as well as a win for the Songwriter of the Year Award at the YYC Music Awards.

“Lightbulb” was written in collaboration with Ontario country duo, Buck Twenty and he then completed the production process himself at his home studio.

“The music industry has changed…we’re in an amazing time, what I have created forLightbulb and this entire project, is something I could only have dreamed of when I started in music 20 years ago. I wrote, recorded, produced, and mixed the song…the whole album actually. And for this single I’ve created my own stop-motion music video using Final Cut Pro, iStopMotion and Flip-A-Clip.”

Check out the video below and find out more about Troy in our Five Questions With segment.

I’m a singer, songwriter, and producer that fell into the business sideways. I’ve never “paid my dues” and really wasn’t sure I wanted to do music fulltime at all.  We had some pretty significant success w/ a country song that was recorded by Shane Yellowbird back in 2007….the song was called “Pickup Truck”.  It did about as well on radio as a song could have.  It stayed in the top 10 for twelve weeks…and all of a sudden myself and my wife, Joni Delaurier (with whom I wrote the song) were thrust into the music business as songwriters.  She had a lot more experience than I did, but over the last decade, we’ve learned the ropes bit by bit.  We’ve had more than 250 songs recorded in Canada and US, but we’ve certainly failed more than we’ve succeeded…and don’t take our wins for granted.  We’re very grateful that we get to write songs for people and do something we love together.

I’ve been producing and audio engineering for the past few years…and decided I wanted to put together an album of songs that were uniquely me.  The album is called Lonely Ghost and I’m proud to say I recorded, produced, mixed and mastered the entire project.  For me, being involved in the entire creative process is more fun than I handle….pure joy!!

Writing wise I’m all over the map…mostly because I love everything.  I’m NUTS about Katy Perry, Kacey Musgraves and Lennon Stella…but also can’t get enough of the Beatles, Nirvana, and Violent Femmes.  I love anything that’s real…joyful….and honest.  So, as a result, I tend to write as close to my heart as I can.  I like to say exactly how I’m feeling at the moment.  It’s really the only way for me to continue doing it after all these years.

I’m slated to play the Big Valley Jamboree this year.  I try to play shows where I can interact and communicate directly with the audience.  So many of the songs I write have a story if I can’t tell that story, I really don’t feel as connected to the audience.  I love having fun on stage and being myself.  I don’t consider myself as much of a “performer” as an “emotional exhibitionist”. Hmmm…title of my next record????

I think it would be the last track…”Lead Balloon”….it’s sort of the theme of my life recently. I tend to over-love….and then ultimately get myself hurt…but at the end of the day, I know this is all on me.  I suppose sometimes I write the songs to try and work out the problem in my head.  Don’t know if I’m there yet though…haha.

Oh boy….so many.  I LOVE some local bands in Alberta.  Thomas Thomas from Calgary is one act at the top of that list…also, the Provincial Archive from Edmonton (how they aren’t gigantic is beyond me).  I’m a huge Hilary Grist fan (from Vancouver)…and Damhnait Doyle (massive singer/songwriter crush on that girl).  The Good Lovelies…The Tragically Hip….Blue Rodeo… Serena Ryder (how long have you got??)