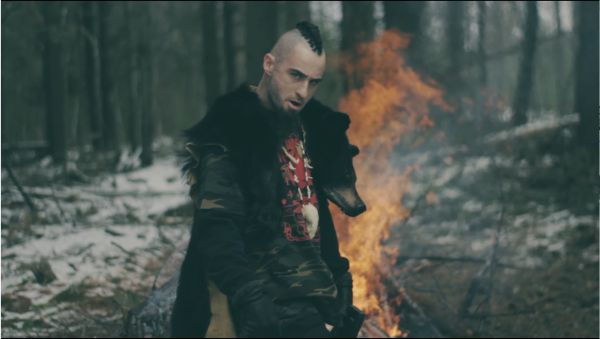 Check out the single below, and find out more about Tha Hungry Bastard in our Five Questions With.

I seek to be the voice and the face of hard workers through my music and clothing designs. Hunger, to me, represents the will to succeed through genuine efforts which I can only represent with hard knocking songs and visually provocative videos and streetwear.

In less than a year I released 7 videos back to back always marrying my country style with my urban side which brought me to the attention of organizations like Madchild’s BaxWar and artists from all over the globe to wear my designs. A multitude of Montreal artists helped me turn the Don’t Forget You City line into an emblem of my city.

Now that I’m well implanted throughout the scene I hunger for a bigger piece of the spotlight.

My music is very aggressive and draws from my life experiences. I like to keep my writing simple and emphasize on the energy and feel of the song. I say a lot in very few words. It’s hip-hop but obviously heavily influenced by rock and metal which was my first love as far as music goes.

There is a bunch of upcoming shows this summer for me. A Quebec tour first and then a Canadian Tour. The dates are soon to be announced. My live performance is exactly like my music but on steroids. Somewhere between SlipKnot, ICP and Tech N9ne

At the point I’m at in my career it would obviously be “Valhalla” the last single I’ve released. The songs draw a parallel between the way Vikings raided new lands and my own conquest of the music industry.

Obviously Madchild and Prevail. RIP Gordon Downie, Tragically hip will always be in my heart. I grew up with my bigger brother listening to Rush all the time so Tom Sawyer was constantly in my head. And I can’t forget my brother Sans Pression from Montreal.