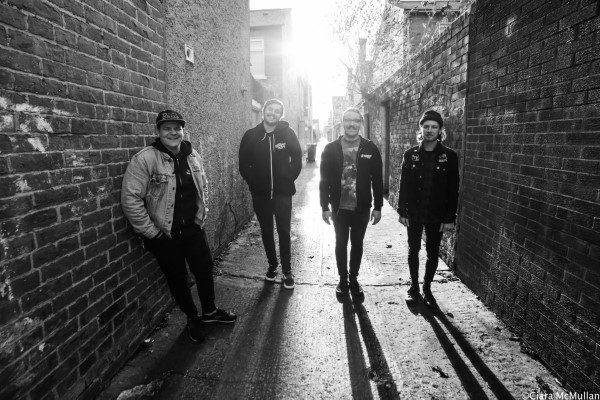 Montreal’s Pouzza Fest takes place from May 17-19 featuring some of the greatest punk music that’s out there! We’re happy that we’ve had the chance to count down to this festival with you. We started our countdown with The Planet Smashers, Answers, HVAL, Subb, Gutter Demons, Seth Anderson, Danny Rebel and the KGB, The Corps, Copper Crown, Audio Visceral, United Snakes, Pale Lips, The Readys, Anti-Queens, Old Wives, BOIDS, Downway, and Back of the Class. Now, we’re chatting with Guilhem and his band, Lost Love who play on May 17 at SOIRÉE. See the full schedule here.

Hey, I’m Guilhem. I’m one of the owners of Pouzza. I’m in charge of booking and I do a lot of other stuff too. I started volunteering for the festival in 2012. I also play in a band called Lost Love and I play acoustic/solo show under the very original name of “Guilhem”.

Since 2011, I feel like Pouzza is the official moment where we can all feel like summer has started. Having our festival as the first (or almost the first?) festival of the summer is usually a positive thing: people are stoked that the nice weather is back and they are not tired of all the festivals Montreal has to offer in the summer.

Yeah. I don’t really have a “favourite” memory. I would say the overall good vibe in every venue and on the streets between each venue always feels great.

The list is too long but overall I would say all the “smaller” bands. Like those 5 bands: Cold Wrecks, In The Meantime, Dead Words, Lone Wolf and No Matter

It depends on where I am. Anywhere in the world, Pizza. But in a small town Quebec, I will definitely go with poutine. See, poutine in Montreal is not that good, you need to go in a small town, in a small snack bar, and then you can understand the true nature of poutine.

Yeah, I’m playing a festival in France called This Is My Fest on June 8th (I think?) and apart from that with Lost Love, we’re playing a bunch of cool festivals in Europe at the end of July /early August. Dates will be announced soon.

With Lost Love: “Fun weezeresque punk drenched positivity”
When I play solo: “This guy should do comedy”

Be bold. Play as many shows in as many different venues/cities/countries as possible. Meet people. Make friends. Enjoy every little thing in the process. Write and record as much as possible.