Countdown to Pouzza Fest 2019 – Interview with Back Of The Class 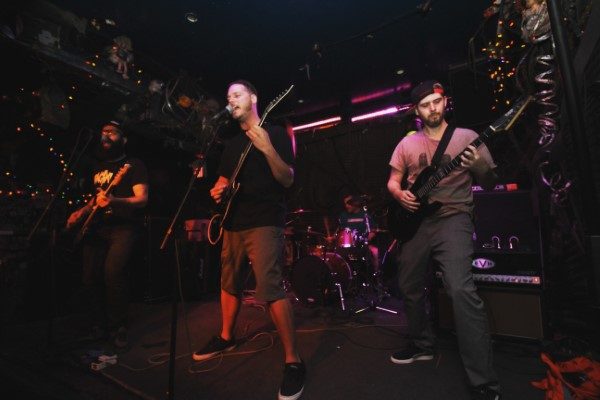 Montreal’s Pouzza Fest takes place from May 17-19 featuring some of the greatest punk music that’s out there! We’re happy that we’ve had the chance to count down to this festival with you. We started our countdown with The Planet Smashers, Answers, HVAL, Subb, Gutter Demons, Seth Anderson, Danny Rebel and the KGB, The Corps, Copper Crown, Audio Visceral, United Snakes, Pale Lips, The Readys, Anti-Queens, Old Wives, BOIDS, and Downway. Now, we’re chatting with Toronto’s Back Of The Class who play on May 19 at Turbo Haüs. See the full schedule here.

We are “Back of the Class” a fast melodic skate-punk band from Toronto, Ontario, Canada. The music is influenced by bands that started back in the 90’s like Strung Out, Belvedere and most definitely Propagandhi. Our 4-piece group consists of Paul (lead guitar/vocals), Clark (guitar), Gabe (bass/vocals), Dave (drums/back up vocals). We all grew up in various punk scenes from Florida-Montreal-Ottawa-Toronto and have played in other bands in recent years and are stoked to be in Back of the Class. (Ex Spoiler/The Daily Times/W!NSLOW). We have our first release (Demo) available on Bandcamp and most streaming sites like Spotify.

Otherwise, we are working on writing new stuff and getting out to play live as much as we can.

Honestly, we are pretty fresh as a band Pouzza Fest will be our first festival so it’s all new with this line-up. Lots of sweat, beer, weed and practice in our jam space and getting in touch with as many promoters/venues to try and hook up rad events like this is the approach. And yoga…or sleep…but, mostly naps.

First time participating and we’ve been watching as fans in the pit, but so many friends bands have had the chance to play in previous years. Favorite memory? Seeing any smaller acts blowing up and playing the bigger stages at festivals like this is amazing! Our drummer Dave loved seeing Lagwagon at Pouzza a couple of years ago.

There are so many rad bands, we are trying to catch a bunch. Strung Out, PEARS, Samiam, Iron Regan, etc. The way Pouzza is set up we should be able to see so many bands because of how close the venues are. It’ll be cool to see Strung Out with their new drummer and hopefully hear new songs as well.

Any greasy, cheese-covered food will do. We aren’t picky. Some of the band is vegetarian so toppings and gravy contents may vary — but we’ve never claimed to be healthy. Jam that Montreal style gooey goodness in our faces and we’ll take it from there.

Nothing booked yet, we’re working on it.

Practice as much as you can, take advice from other talented musicians and make sure the other people and the music you write make you happy. If it’s not fun anymore, bail, try again. Stay positive and remember why you picked up an instrument in the first place. And don’t listen to us…we’re still learning after decades in the game. Good luck!

Like I was saying before, we are currently writing new music with the goal to get out a proper studio release by next year. We’re focusing on playing lots of live shows to get ourselves exposed to more fans and having a blast on stage! Generally, we are stoked for what’s going on now.