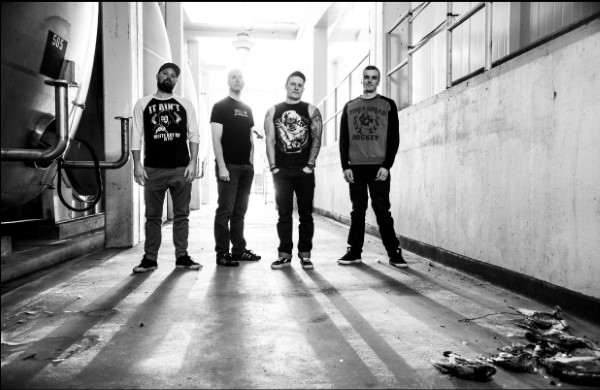 Montreal’s Pouzza Fest takes place from May 17-19 featuring some of the greatest punk music that’s out there! We’re happy that we’ve had the chance to count down to this festival with you. We started our countdown with The Planet Smashers, Answers, HVAL, Subb, Gutter Demons, Seth Anderson, Danny Rebel and the KGB, The Corps, Copper Crown, Audio Visceral, United Snakes, Pale Lips, The Readys, Anti-Queens, Old Wives, and BOIDS. Now, we’re chatting with Downway who play on May 19 at Foufounes Électriques. See the full schedule here.

Downway is a melodic punk band that hails from Calgary, Alberta. Between 1995 and 2003 they toured extensively throughout North America, releasing an EP, 4 full length albums, and 4 music videos which aired on Muchmusic and MusiquePlus. They have shared the stage with many of Punk Rock’s biggest names including Face to Face, Goldfinger, Lagwagon and Strung Out. They reformed in 2017 and revived their love of touring with their first trip to Japan in 2018. Pouzzafest marks their first show in Montreal in over 15 years and is part of a week long tour with Riverside California’s Hit the Switch.

Most of our festival experiences were associated with the 3 years we performed at the Vans Warped Tour. At that time we toured in a very old, very unreliable RV with no air conditioning. For us, a springtime/early summer festival will be a nice contrast to those days of melting in the heat.

This will be our first time playing PouzzaFest and we couldn’t be more excited. We have had many incredible nights in Montreal that included Foufounes at one point or another. To get a chance to play there as part of this incredible festival seems too good to be true.

There are almost too many to name. We have probably played the Samiam album Astray 150 times while on tour so they are high on the list. Against Me, Strung Out and Andrew WK are all amazing and we are very stoked to be playing with Pears.

Coming from out west our poutine game is pretty weak. There are a few spots in Calgary who do a good job but overall this is a Pizza town. That said, we would always hit up Chez Ashton whenever possible, so for this week the vote has to be Poutine.

We are very excited to be part of Moments Fest on the Siksika Nation before we leave for this tour. It’s an opportunity for us to play with a ton of cool local bands in a really unique setting.

If you want to be in a band, find people you love being around and make music for the joy of it, not to get anywhere. Then buy a van and see what happens.

We’d like to see Europe and South America in the next few years, continue to play live music and keep making amazing friends doing it.