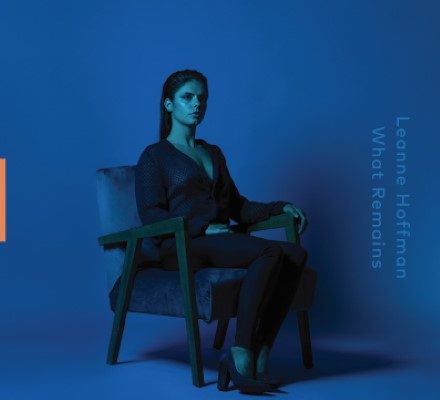 May 10th, 2019 is a date that singer-songwriter Leanne Hoffman will not soon forget, as she releases her debut album, What Remains.

Originally from Exeter, Ontario, Hoffman now calls Halifax home. According to Hoffman’s website, “she has the rare ability to dress a beautiful melody with content that is both biting and elegant. With lyrics beyond her years, and a smart, sarcastic tone, her audiences are left captivated and wanting more.”

The album begins with “What Remains”, a tune with a catchy beat. Hoffman’s powerful voice will certainly gain the attention of the audience, as the guitar adds that little something extra to keep them entranced. This seems to be a song about identity; reminding someone of the small town, prairie life and topping it off with a Joni Mitchell vibe.

“Blind and Broken” entices a dreamy feeling through its melody. However, during its release as a single earlier this year, Hoffman indicated that the track “speaks to the frustration that comes with being a woman in a society where the justice system is constantly letting you down and placing men on a pedestal.”

“Turning the Truth”, a track that was co-written with Erin Costello, is one of Hoffman’s catchy new singles. Hoffman seems to sing about disappointment and truth, as evident through the empowering lyrics. Throughout the track there was a very prominent organ sound, giving it a vibe reminiscent of an eighties feel.

“Human” is a bit slower than the other tracks. Hoffman sings about taking care of and putting yourself first, something that many people struggle with. This is definitely a song that many can relate to. The addition of guitars and synths are a great touch, as it helps to create a feeling that is almost a mixture of empowering and being defeated. ‘If I Leave Town’ also takes on a slower melody, filled with emotion and loneliness. It leaves you to wonder that if things had to change or you had to leave town, would it be noticed?

“Growin Old”, another track co-written by Erin Costello, seems to be a testament to the changes that one may encounter in their life. It is a clear reminder to enjoy the simple things and about all the things that we will encounter while growing up. We may not have control over many of the aspects; we just have to deal with them as we can. This is probably one of my favorite tracks, as it slides into the smoother side of a funky sound.

“Maybe” leaves a more hopeful, playful feeling than some of the other tracks. The use of space and silence in the first riff aids in this playful sound. It has a simple, yet catchy beat that allows you to tap along. ‘Maybe’ seems to give the impression that we are in control of our destiny and can choose whatever route we desire. We will all have our ups and downs but that just helps to shape who we are and what we become.

“Redirect Your Sails” has a darker feel to it with the melody at the beginning leaving you with an unsettled feeling, almost as if you are anticipating what is yet to come. Nonetheless, it has a hopeful message, reminding you that it isn’t the end of the world when something goes in a different direction. You have the power to redirect your life.

“Home”, the albums last track, leaves the audiences on a peaceful note. The piano ballad as a soothing sound accompanied by powerful vocals. This creates a more intimate feel as the album comes to a close.

Hoffman took almost four years to finish this album, as she was originally a member of the bluesy folk-pop duo Magnolia. When the duo disbanded in 2013, she “wanted to explore her own musical identity, on her own terms.” The album is released via Venue Records, a label created by award-winning artist and producer Erin Costelo. Not only was Hoffman one of the first to sign to this label, but she also co-wrote a few tracks with Costelo that are featured on the album. This album features songs written over the past five years of her life, showing growth as she is “digging into the resonance between words, finding ways to say more with less.” The result of her hard work “feels equally indebted to contemporary pop acts like Metric as it does to songwriting greats like Randy Newman and Paul Simon. Against a backdrop of Americana-infused guitars and subtle synths, Hoffman’s lyrics and resonant voice remain front and centre; she’s singing about subjects from romance to family and aging to gender equality, sharing her soul as she chases that magical musical synergy.”

Leanne Hoffman is well on her way to making a name for herself as a solo singer-songwriter. With powerful vocals that have the ability to move from soulful – to playful/bubbly – to raspy/gritty, Hoffman has created an album to showcase her talents for all to hear. The addition of the musical melodies and the creative use of synths, guitars, and keys to create a wide range of sounds, leaves something that will captivate a wide variety of audiences. “With a sound reminiscent of Lou Reed, and the pop-electric feel of Metric, What Remains is an album that demands attention, just like it’s creator.”