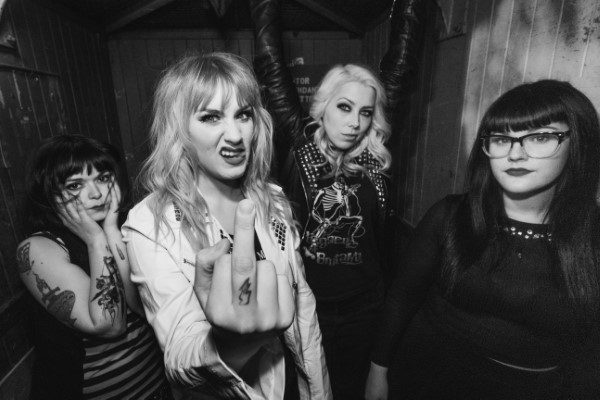 Montreal’s Pouzza Fest takes place from May 17-19 featuring some of the greatest punk music that’s out there! We’re happy that we’ve had the chance to count down to this festival with you. We started our countdown with The Planet Smashers, Answers, HVAL, Subb, Gutter Demons, Seth Anderson, Danny Rebel and the KGB, The Corps, Copper Crown, Audio Visceral, United Snakes, Pale Lips, and The Readys. Now, we’re chatting with Anti-Queens who play on May 18 at Beer Garden. See the full schedule here.

First off, care to introduce yourself to the Canadian Beats readers!

We are Emily, Valerie, Dallas, and Taylor, also known as the Anti-Queens!

We’re doing an east coast US run to tighten up our stage show so we’re ready to rock the main stage this year, and also so we get used to the smell of the van.

We have played here once before! I think it would be just hanging out with everyone. Pouzza has such a family vibe. It’s great to be back.

Against Me! for sure! Strung Out! Bad Cop/Bad Cop! The Readys! Can’t wait to finally see Gallows Bound from Virginia as well and well, Planet Smashers, duh.

We are! We’ll be at Montebello Rock, Montreal  ’77, le Déluge, Riverfest in Elora. Big summer!

Put the work in! It’s not just going to come to you if you’re sitting at home. Go get it!

We’re excited to release our label debut on Stomp Records produced by Steve Rizun. We put a lot of work into it and we think people are going to love it. The single off the album should be out in mid-July, along with a brand new video, and the album itself should be out in September or so. We’ll be touring a lot in Canada and Europe to support the release. You’re going to be seeing a lot of us 🙂