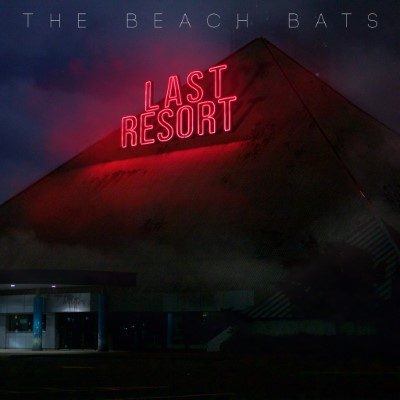 Last Resort is the debut of the Hamilton-based band, The Beach Bats.

Overall, Last Resort is a real trip. The album opens with tracks that sound as if Jim Morrison met Jimmy Buffet and they escaped to the tropics to have a beach party and get weird. As the album progresses, though, the tracks get heavier and stranger as the Beach Bats lead you from the shore to a bacchanal in the dark woods near the beach with a Frankenstein monster for company.

To create this wonderfully strange journey, Last Resort uses deep male vocals, electric guitar, drums, keyboard, and pedal steel – but tracks are also punctuated with a variety of other eclectic sounds such as saxophone, wooden blocks, tambourine, female vocals and even samples of laughter.  The scope of Last Resort is really impressive in its variety. What’s more impressive is how the album still holds together as a complete listen, utilizing the lead vocalist and core instruments to create a through-line for the surreal adventure.

Though I enjoyed listening to the album as a whole, standout tracks on the album for me were “How Long” and “Tropical Illusion”. Both of these tracks are definitely on the chiller side of the album, but I think make for a good solo listen. “How Long” has this great female backing chorus which gives the Beach Bats an almost Motown feel layered onto a sloping beat which is hard to not rock your hips to. “Tropical Illusion”, on the other hand, is a cool island jam with subversive lyrics as the vocalist sings cheerfully about the bliss of living a lie. As the lyrics say, “You say you’re in love, but I know that it’s almost” — but the lyrics don’t decry this pale affection as a negative, just a ‘Tropical Illusion’ where they don’t mind pretending the love is real.