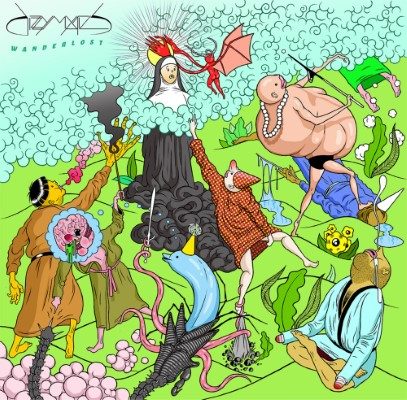 Winnipeg, Manitoba based progressive alternative rock band Dizzy Mystics have released their debut full-length album, Wanderlost. A long time coming, the record follows two previously released singles, the first of which, “Letter” was released in late 2017, with “The Frequent Sea, Consistent Seas” being released in early 2018 – which was paired with a stunning music video just over two weeks ago. Despite that, Wanderlost surpasses expectations, ultimately proving to be very well worth the wait.

Opening with the initial single, “Letter”, Dizzy Mystics kick things off with a flurry of soft notes coated in acoustic and mellow textures and performed in a polyrhythmic fashion. Immediately, it is very clear just how tight of a band Dizzy Mystics are and how impeccable their musicianship – as a collective and individual members – is. “Letter” serves as the perfect introduction to the band as they revel in soft alternative rock textures, performing technical music which is often found only in modern jazz fusion and progressive metal. This comes across as effortless, just as it does in the climactic “The Frequent Sea, Consistent Seas”, which I have previously compared to the lovechild of Incubus, Snarky Puppy, and Animals As Leaders. Furthermore, elements of world music can be heard on “Shindigjig” through an impressive mandolin solo, along with pop and the blues set over a killer bass line before exploding into a hard-hitting chorus on “Fallasophy”, while seemingly blending all of these and more on one of their more ambitious tracks, “The Scythe  Pendulum Swing”.

There is no question about it, as a whole, Dizzy Mystics is made up of a collection of elite musicians with lead guitarist and vocalist Kyle Halldorson standing out as one of the most unique and inventive songwriters I have heard in a very long time. “The Anti-Dream” stands as one of my favourite tracks with a vibe that feels strongly reminiscent of Tool and Soundgarden, while still remaining truly original. That being said, “Jaunter” is so damn quirky and funky with a feeling that sits somewhere between Stevie Wonder and the Dave Navarro era of The Red Hot Chili Peppers. All things considered, however, the eleven-minute monolith that is the title track, “Wanderlost”, concludes the album in a manner that surpasses ambitious. Perhaps the craziest part of “Wanderlost” is simply that is works without once losing it’s momentum, giving the record a truly fantastic conclusion.

From front to back, Dizzy Mystics prove again and again to be a truly incredible band, making Wanderlost a very strong debut. The musicianship that runs through the band is insane while their songwriting skills are equally impressive. Whether they’re blending styles which typically class or running through a progressive rock gauntlet, Wanderlost is a seamless and organic album which one can very well have on repeat for months and still continue to hear new things. Without a doubt, should you be into rock, alternative music, or progressive metal, Dizzy Mystics is a band to watch out for as they continue to make waves beyond Wanderlost, their near-perfect debut.