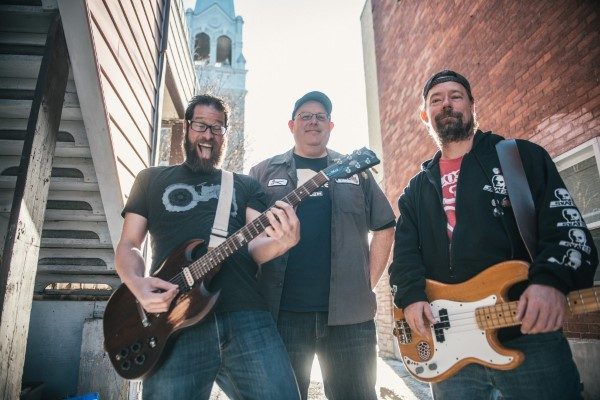 Montreal’s Pouzza Fest takes place from May 17-19 featuring some of the greatest punk music that’s out there! We’re happy that we’ve had the chance to count down to this festival with you. We started our countdown with The Planet Smashers, Answers, HVAL, Subb, Gutter Demons, Seth Anderson, Danny Rebel and the KGB, The Corps, and then Copper Crown. Now, we’re chatting with Audio Visceral who play on May 18 at Foufounes Électriques. See the full schedule here.

Hi! I’m Kevin, I play bass for Audio Visceral. We are a three piece punk band from Vankleek Hill On (far eastern Ontario)

We prepare for festivals season, by first being genuinely surprised if we get asked to play one. And two, drink water. Lots of water. Stay hydrated folks.

We have been lucky to have played it many times. This year will be our 5th. For me personally, I have played in three straight Pouzza baseball tournaments. That’s is a great way to spend a Saturday afternoon in Montreal, and meet new people in bands and the industry.

I saw Samiam in 1990 in Toronto, and they have always been one of my favorite bands, so I’m super excited to not only see them but share the stage with them on Saturday night at Foufs. Otherwise, it’s a great year to see all our friends play. Lost Love, Peelers, Laureate, Oakhearts, Pseudo, Ship of Fools, Jon Snodgrass, Old Wives, Anti Queens, planet Smashers, Steve Adamyk Band, Snacks?!, pale Lips, Boids, k-Man and the 45s, Penske File, the Readys, Fresh Hell, The Nils… so many pals.

As someone not particularly healthy, I’m gonna have to say both. I’d have a hard time picking one over the other, which then makes an actual Pouzza the perfect food really.

Not until the fall. As a band with fairly deep ties to Pouzza sponsor Beaus Brewing Co (CEO, and Head Brewer in our band), we also put together an Oktoberfest weekend in our small village and will be playing at that, on the Blackforest skate/punk stage.

Just keep doing it. Always.  Never stop. No matter what.

Playing in Ottawa with Ten Foot Pole in June, then hopefully hitting the studio again soon with Ian Blurton. We have 8 songs already recorded with him, and now have some more to record and hopefully get another record out!