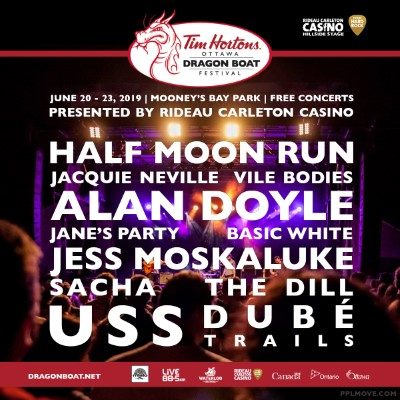 With everyone warmed up from its winter edition this past February, the Ottawa Dragon Boat Festival is back it’s ever-popular summer festival June 20 to 23 at Mooney’s Bay Beach; and will once again feature a diverse lineup of free concerts to entertain athletes, spectators and casual music fans alike.

Headlining the first show on June 20 will be Montreal’s Half Moon Run.  The indie rockers will cap off the night, with local acts Jacquie Neville and Vile Bodies opening.

Toronto’s Jane’s Party and London’s Basic White will warm the June 21 crowd, who will be excited for the all-out kitchen party as guaranteed by the ever-exciting Alan Doyle.

June 22 will take on a decidedly more country theme as Jess Moskaluke headlines the evening’s festivities, alongside Warkworth, ON’s Sacha and Hamilton’s The Dill.

Toronto eclectic rockers, USS (Ubiquitous Synergy Seeker) will close the festival on June 23 with a pair of Ottawa up-and-comers, Dubé and Trails.