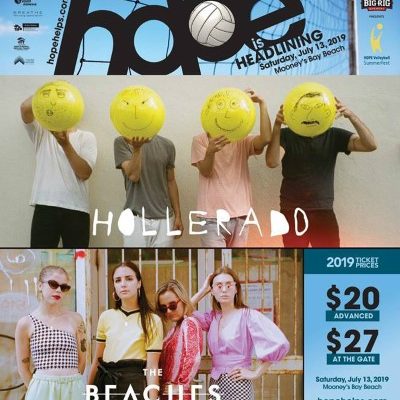 Ottawa’s Hope Beach VolleyBall Summerfest might be known for being one of the world’s largest one-day volleyball tournament, the coinciding 2019 concert lineup is scheduled to feature something truly special: the last hometown gig for Hollerado.

While the band announced their pending breakup with the announcement of their upcoming album, Retaliation Vacation, back in February, the friends from the Ottawa suburb of Manotick are giving the world one last tour.  Their July 13 performance at the Hope Beach VolleyBall Summerfest will mark the last time the band will play to their hometown.

Joining Hollerado on the Mooney’s Bay stage will be Toronto’s The Beaches, as well as the newest Ottawa superstars, Elijah Woods x Jamie Fine.

HOPE (Helping Other People Everywhere) Beach VolleyBall Summerfest is in its 37 years, and has donated more than 3.5 million dollars to over 110 charities across Ottawa; with the 2019 beneficiaries including Youth Services Bureau of Ottawa, The Perley and Rideau Veterans’ Health Centre and Shelter Movers.  For tickets and more information about the event, please visit http://hopehelps.com/.