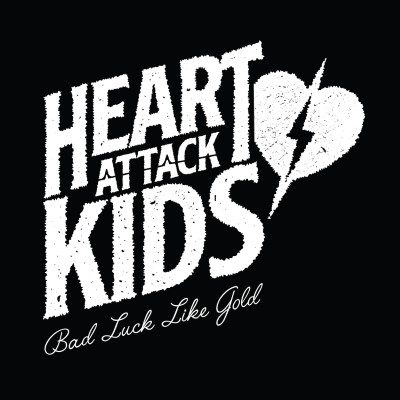 Hailing from London, Ontario, electrifying punk duo Heart Attack Kids have returned with their second full-length album, Bad Luck Like Gold. Not only is this the follow-up to their very well received 2016 debut, No Future, but it marks the band’s first release since signing with New Damage Records. With the stakes raised, Heart Attack Kids certainly deliver, making their label debut a success.

Opening with the sludge of a track simply titled “Intro”, the instrumental thirty seconds bleeds right into the abrasive yet poppy and relentless “Do What You Do”. The track perfectly kicks off the record with what feels like a high energy sledgehammer to the side of the head while remaining catchy and anthem-like. The same could be said for tracks like “B.R.B.”, “The Driver”, and the Rise Against inspired “Slithering Friends”.

Heart Attack Kids continue to dig deep into their punk roots with tracks like “Modern Decay”, “Running On Empty”, “Sirens All Summer”, and the explosive title track, “Bad Luck Like Gold”. The former from that list features none other than Cancer Bats vocalist Liam Cormier and truly stands out as one if not the, strongest tracks on the album. At their core, underneath the thing pop sensibilities, Heart Attack Kids are a gritty punk band who are delivering an album’s worth of hard-hitting punk bangers that simply refuse to let up.

What makes Heart Attack Kids and Bad Luck Like Gold stand out from the many other emerging punk bands is their ability to seemingly effortlessly take the aggression, excitement, and danger of old school punk bands – take The Stooges, The Sex Pistols, and The Germs for example – with a rich sense of melodicism that makes their songs catchy and fun to sing along to. This keeps them unique and fresh as they aren’t quite a hardcore punk band, nor are they like any of the indie punk bands (spoiler, most of those groups aren’t all that punk), yet, they could fit in with either. That being said, Bad Luck Like Gold shines brightest when Heart Attack Kids are at their heaviest and grimiest. Regardless, Bad Luck Like Gold captures a raw energy that feels live; not only am I blown away with this album, but I am very excited to see such chaos in a live setting.