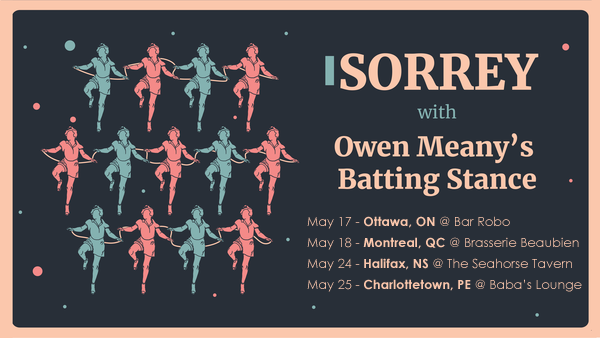 The stint sees Sorrey on the road in support of their latest single, “Talking To Them”. Released in advance of a Maritime tour with Tokyo Police Club, the track finds the band embracing airy synths, pumped up rhythms, and an undeniable bounce to deliver a song focused on making the call to move on. It’s the dial tone equivalent to the final moments of a relationship – a pop song for everyone ready to cut the cord, hang up on their past, and tune into the best decision they’ve ever made.

Owen Meany’s Batting Stance emerges from the studio where they’re working on recordings for a forthcoming album to join Sorrey for these dates. Drawing influence from acts such as The Mountain Goats and The Weakerthans, the band’s penchant for impassioned narratives weaves together with amped up folk rock and committed earnesty.