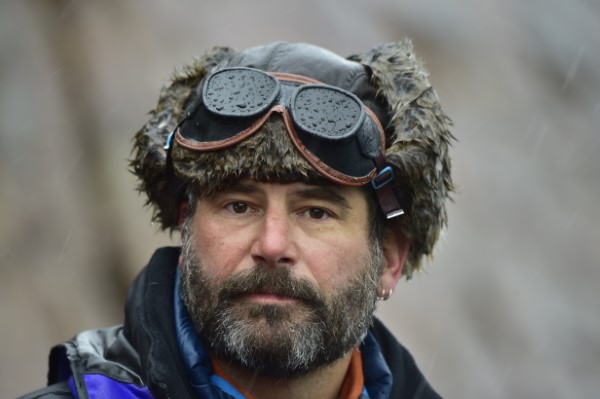 Canadian adventurer, writer and miner of song David Newland releases his first single and video for “Musk Ox Stew”, a cut from his upcoming album Northbound, a live album of original songs based on his travels in the Northwest Passage with Adventure Canada.

The video for “Musk Ox Stew” was produced by Two Blue Shirts. The album, produced and mixed/engineered by Michael F. Nunan with mobile recording from Doug Smith, was mastered by João Carvalho with creative consultations from Ian Tamblyn and Barney Bentall.

On Newland’s new single “Musk Ox Stew,” the assemblage of performers onstage mirrors the lyric of the song, describing the warm embrace of a musical community wide enough to include everything from a lively accordion to Inuit throat singing, and from country twin fiddles to an Irish bodhrán. There are even twin jawharps, a nod to the use of that humble instrument in the North. In the spirit of the song, Newland shares the spotlight, highlighting the throat singers, drummer, and fiddlers, among others. The song recounts his authentic experience of visiting communities North of 60 and finding a friendly welcome that included a gym floor feast full of dancing, games, kids running around, and a meal built around.

“It’s a story told by multiple voices on a day when a bunch of folks from southern Canada have arrived by ship and have been welcomed into an Inuit community. There’s a whole cultural exchange that takes place, centred on country food, and then a square dance breaks out. Fiddle tunes and dances brought by Scots whalers are alive and well in Nunavut. When everyone gets together something magical happens, and the throatsinging that weaves through the song is a reminder that Inuit stories are interwoven with the Canadian myth of the Arctic.”

Check out the video below and find out more about David in our Five Questions With segment.

I’m a writer, speaker and musician and photographer based in Ontario. I’ve been active on the folk scene in Canada for about twenty-five years and I’m about to introduce my new CD, NORTHBOUND. I travel in Nunavut and Greenland in the summers as a Zodiac driver, performer and expedition host with Adventure Canada. That’s what inspired this record.

I write epic Canadian folk songs! I’m moved by geography, history, and culture. My influences are people like Gordon Lightfoot and Joni Mitchell—Canadian writers who tell stories and paint pictures in song. For me songs are very often about relationships with landscapes, whether mythical, actual, or psychological. On this album the landscape is the Northwest Passage, which is both a real and a mythical place. To Europeans it’s a sea route. To Inuit it’s their home.

I’m launching my new CD on Friday, April 26 at Hugh’s Room Live in Toronto and I’ll be doing a bunch of shows promoting the record after that. The live show interweaves stories, photography, video and the original songs I’ve written. I travel with a five-piece band, Uncharted Waters, and we have a kind of folk-Celtic-global sound that’s pretty dynamic. We often feature the Inuit throatsinging duo Siqiniup Qilauta in our shows. It’s powerful and emotional. We go to some very interesting places musically and spiritually.

Musk Ox Stew, the new single and video, has all the elements: a unique sound and instrumentation that includes two jaw harps, two fiddles, and two throatsingers. It’s a song about being welcomed into a community in Nunavut and being offered “country food” brought in by local hunters, and then winding up square dancing with the locals!

The artist whose work takes up the biggest chunk of my CD collection is Ian Tamblyn, the master of Canadian landscapes in song. His latest album, Let It Go, is among his best, and that’s saying something. I’m a huge fan of Drew Gonsalves, one of my favourite songwriters and the force behind the Juno-wining band KoboTown. He’s on this record. So is Annie Sumi, a young singer-songwriter whose voice is so earthy, and so ethereal all at once, it’s just enthralling. And perhaps the most powerful band I know is my friends Digging Roots. They leave audiences changed at heart.