Victoria Anthony releases video for “Because I’m A Girl” 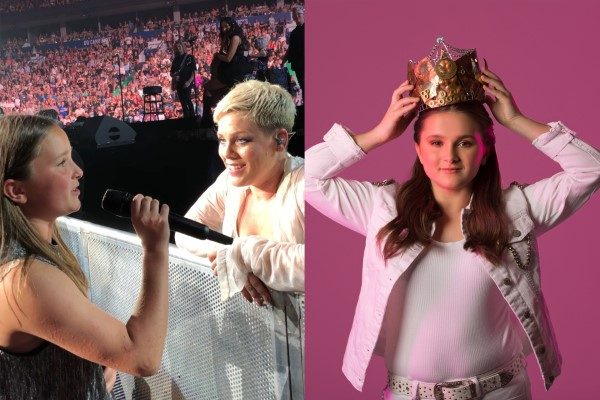 Vancouver, BC-based teen artist, Victoria Anthony became an internet sensation in 2018 after singing her heart out to her idol, P!NK in front of 18,000 spectators at Rogers Arena. Now, after being inspired by P!NK telling her to “never stop”, Victoria has spent the year writing and recording her own music. She recently released her debut single, “Because I’m A Girl” which is co-written by Victoria with Rob Wells and Shobha, a multi-platinum production team who has worked with such artists as Justin Bieber, Ariana Grande, and Selena Gomez. The single has garnered over 180,000 streams on Spotify and 350,00 views of the lyric video on YouTube.

“It’s not too political, but political enough to get my meaning across” says Anthony.  “It’s about the importance of women having control of the choices in their life; it’s about empowerment and standing up for yourself, starting when you’re a girl and keeping that sense of inner strength throughout your whole life. And it’s also about women standing together, united, to make all our lives better”.

Today, she has released the official video for the single, which was directed by actress Nathalie Boltt and based on an original concept devised by Anthony herself.

Victoria is currently writing and recording songs for her debut album, set to be released in early 2020, so stay tuned for that.

Check out the video below, and take a few moments to find out more about Victoria through our interview segment.

Last year you became an internet sensation after singing to your musical idol, PINK, at Rogers Arena in Vancouver in front of almost 20,000 people. Were you surprised with all the media attention the story received across the world, and how did that experience change your life?

It was so surreal to see how this incredible moment has touched so many lives. Not only has it changed my life, but many others showing them that their dreams can come true, too. When P!nk whispered to me “never stop” she gave me the confidence and the inspiration I needed to start songwriting. Since then, I have released two singles and have done some live performances. I have also really developed my passion for singing and songwriting. My social media following has also grown which is so amazing. It allows me to share my music with people and that is really something special.

You have just released your single “Because I’m A Girl”. Can you tell us how that song came about and what it means to you?

I went to Toronto to write with Rob Wells and Shobha. We started in the studio by Rob asking me what I’m passionate about. I said I was passionate about empowering women and that is what we wrote about. I truly believe that women and girls should never be held back and should always be treated as individuals with choices. I wanted to write a fierce and strong anthem that people could dance to while still thinking about ways that they could make a difference. I’m so proud of what we created and already the response from people who have said that this song means something to them.

Can you tell us a little bit about the concept of the video for Because I’m a Girl?

The concept for the “Because I’m A Girl” music video is one of the girls working in a mannequin factory. We are creating these mannequins which represent fake, plastic girls that are the “stereotype”. It shows that we are all part of creating that and that we all have the power to stop enforcing these stereotypes. Eventually, we all escape, supporting each other to get to the exit. We transform from dark clothes to light clothes which represent coming from a negative place to one where we are free. The dancers put a crown on me which signifies ownership of our lives and choices. When we escape, we see that it was all through my eye and that it was all a vision for what we can do and how we can support each other to a better, more equal future.

The video for Because I’m a Girl was directed by Nathalie Boltt, the actress who plays Penelope on the tv show “Riverdale”. How did that happen?

When I came up with the idea for the video, I brought it to Keyon Slowly of Leftside Productions and I told him that I really wanted a female director. He called around and, lucky enough, Nat Boltt picked up the call and said she was interested in the song and the vision. I’m so glad to have worked with Nat. She is such a talented director, an incredible person and did an amazing job of bringing my vision to life.

If you could sing a duet with any Canadian artist who would it be and why?

If I could sing a duet with any Canadian artist, it would be Shawn Mendes. He is just so talented and I really look up to him especially as a songwriter. I think his style of music is so unique and really special. He also just seems like a really nice guy.