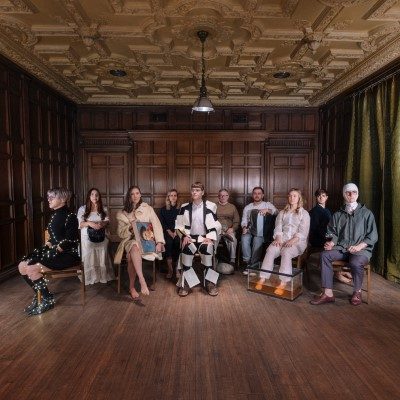 Reminding me right from the opening song “Uniform” of the band The Bravery, the mix of electronic keys and distorted voices is something not commonly heard in music these days so opening with that kind of tone is interesting for newcomers to the band. “Young Evil” however was released along with a music video and is a mellowed down version of the previous song. The singer’s voice shines in this song with his perfect flow of highs and lows, showing talent beyond belief.

A few songs were brought to my attention prior to this first listen, “Italics” being the first. The singer’s vocals amazed me from the start mixed with the string instruments and beautiful yet simplistic piano and drums throughout. This song is a good introduction to this band for someone who’s never heard of them.

“Win Ben Stein’s Money” was the other one brought to my attention as it starts off like a warped record then cuts back into that mellow sound of the band. This song has tones of the band, The Bravery. As someone who loves that band, this song relates me to them so much meaning I’ll have this song on repeat for sure.

One of the closing tracks “Last Known Sighting” shows the unique skills of each member of the band, the amazing vocals and lyrics, the electronic synthesizer, the drums with a steady but perfect beat and everything else in between gives this song a flawless flow throughout and the perfect, calming end to this great album.

Back in March, the band performed two shows at once, one in Winnipeg and one in Saskatoon, you may wonder how is this possible? Maybe you’re thinking there was holograms or projections, or live streaming? No, it was two separate bands, both Yes We Mystic. Now both bands have not only appeared in the band’s video for “Young Evil” but both are on the cover of Ten Seated Figures. If that’s not unique, what is?

This is an album I’m making sure I save on Spotify, as it can mix well with the music I’m already a huge fan of. For anyone who wants to listen to something you’ve never heard before, Yes We Mystic has you covered.