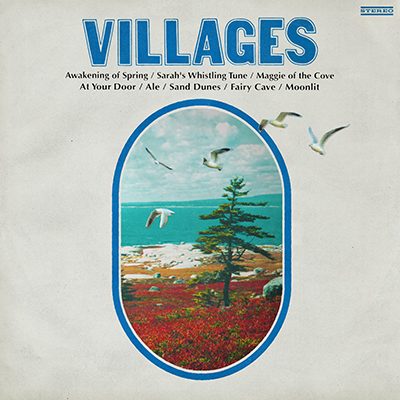 Villages is the first self-titled album of this Cape Breton raised, Halifax-based band.

Villages guides the listener into the album with the sounds of birds before melting away into ethereal, but earthy Celtic tracks, with a modern edge. Using classical instruments such as guitar, drums, mandolin, violin, Villages also uses an electric guitar to update the tone. Similar to Fleet Foxes and the Rankin Family (the band’s cited primary inspiration) each track of Villages are a solid entry to a canon of modern folk songs. Villages grounds their songs in the imagery of nature and storytelling. The result is the listener can have as much following the lyrics as they would putting flowers in their hair and dancing in the grass to welcome the spring.

Standouts on the album were the tracks “Awakening of Spring” and “Sand Dunes”. As the opening track, the “Awakening of Spring” has the aforementioned stellar introduction of birdsong; but it is also a great showcase of Villages overall style as tempo shifts from the slowest lullabies of the album, to their liveliest jigs. “Sand Dunes” on the other hand, has an interesting, almost middle eastern, rhythm melded into its Celtic folk, showing that Villages are not afraid to experiment making me excited to see where the band might take their sound next.