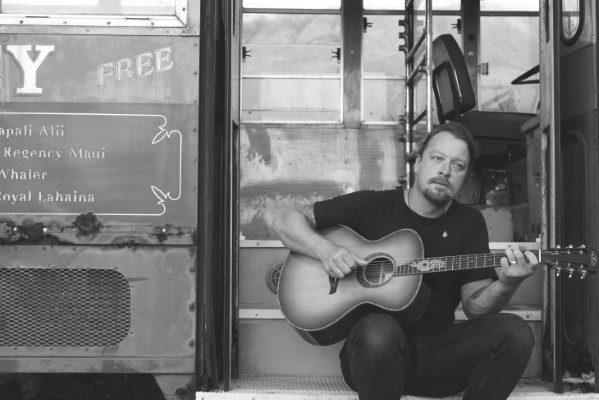 Daniel Wesley is giving fans a taste of his upcoming summer album with his latest single “Fire.” The British Columbia songwriter, known for his signature raspy yet soothing vocals, first came onto the scene in 2006 with his debut Outlaw – followed by a successful sophomore release, six more albums, and a live recording at the Commodore Ballroom in 2017.

As a songwriter Wesley draws from the most important aspects of his life – family, home, traveling, and love. Taking his family from Vancouver to the Sunshine Coast, Wesley continues to evolve as an artist while maintaining much of the same “beach music” vibes that his fans know and love.

We caught up with the music veteran to talk about the new single, upcoming album, and what it means to be an artist with over a decade of experience.

Did moving to the Sunshine Coast and moving from a bustling city to calmer atmosphere impact the way you create music?

Definitely. We have more space now. We live up in the mountains, but five minutes from the beach. I have a studio now that’s separate from our house so I was able to go in there when I felt creative and light a fire and write music. It was very natural.

“Fire” has a great blend of beach and reggae vibes with really powerful vocals – what can you tell us about the making of the song? How did you and your producer John Raham begin to helm the melodies?

I wrote Fire on a trip I was on in Tofino, BC. My friend bought a house there and I was helping him fix up a few things. We had a couple of sessions in the water and in some down time I walked to the beach, sat on the rocks and came up with the chorus to Fire. It happened really quickly and luckily I had my phone to record it. I remember coming back and my friend asked if I got anything good. I remember saying, “I think so…”. John helped with the production big time on this one. We layered a lot of percussion which really drives it, and the vocal delays he put thru a space echo really brought the song home.

Your biography talks about the more focused approach you’re taking to songwriting as you move forward in your career – are there any artists you lean on or draw from who you admire lyrically?

I don’t actually listen to that much music, which seems strange, but I like to listen to nature where we live. If I look up to anyone its someone like Neil Young. He seems to seamlessly navigate his life and music that is so real, it’s very inspiring to watch. I feel closer to artists like him who make different records and always push themselves. I think that comes with time.

What can you tell us about your upcoming EP?

Well, I quit my job as an electrician to write it. It came together with time and patience. Some of the songs were written on trips to Tofino and Hawaii, while others were written on cold nights beside the fire in the studio. I seemed to really be at home writing this EP. It all just flowed out and we took that to the studio where we kept the recording very stripped back. There actually is no electric guitar or amps on this record. We only used an acoustic guitar for the whole thing.

Your longevity in the industry clearly speaks to your talents as an artist – what is the most valuable lesson you’ve learned that you carry with you as you continue to make music?

I don’t pay much attention to what’s going on in the music industry when it comes to what’s new. I just continue to be myself, make music that I like at the moment, and look forward to the next bunch of songs that I write. If the lesson is anything, it’s to be thankful that the well hasn’t dried up for songs. Fortunately, I was able to catch some more.

With the EP set for a summer release, will there be tour dates to follow?

Yes, we have announced a few shows and there will be more in the coming weeks. We plan on being fairly busy this summer and also do a fall tour across the country.