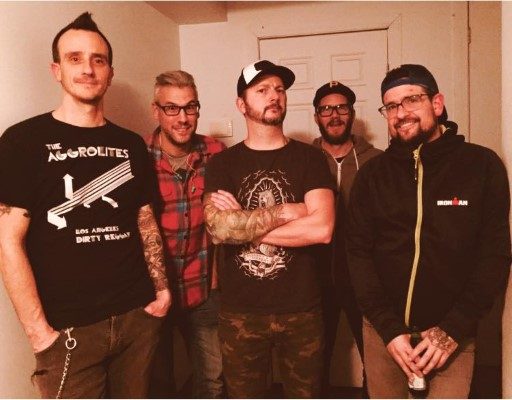 Montreal’s Pouzza Fest takes place from May 17-19 featuring some of the greatest punk music that’s out there! We’re happy that we’ve had the chance to count down to this festival with you. We started our countdown with Montreal’s own The Planet Smashers, Answers, and then HVAL. Now we’re chatting with St-Jean Sur Richelieu’s Subb, who play on May 19 at SOIRÉE. See the full schedule here.

We are Subb, from St-Jean Sur Richelieu, that’s 50 Km south of Montreal. We’ve been a full-time band from 1995 to 2010. During that period we released 7 albums/split/EP. We toured Canada many times, Japan, Europe and a small stint in the US. We did a few reunion shows in 2015.

Since it’s a reunion and that we haven’t played together since 2015, we’ve been rehearsing for a few months, to get in shape and warmed up for Pouzza!!

We haven’t played Pouzza with Subb, but me and Steph have played with two different bands(Low Dead Volume and The Translaters). My personal all-time favorite moment was May 20th, 2012, when I went to see a big influence of me, Classics Of Love with Jesse from OP IVY, at Foufounes électrique. Their set was awesome!! First, and only time I got to see them. And, the Suicide Machines played the after show party, they killed it!! Plus, I got the chance and honor to chat with all members of Classics Of Love and Mike Park, of Asian Man Records, after the show.

The Planet Smashers, Strung Out, Samiam, Big D And The Kids Table, Against Me!… Andrew W.K. should be fun to watch.

Yes, we will be playing Rock La Cauze in Victoriaville on August 10th along with The Sainte Catherines, Planet Smashers, Vulgaires Machins and Sum 41.

Follow your dreams, do what you want, don’t let others tell you what to do. But most importantly, be yourself, be authentic.

After Pouzza, we will announce a few other shows for 2019!!