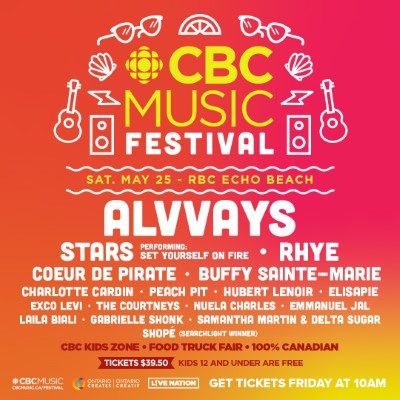 The family-friendly festival, where kids under twelve are admitted for free, will also include a CBC Kids Zone with entertainment and activities. With additional onsite entertainment, and a Food Truck Fair sure to offer up some of the best meals in the city, CBC Music Festival has something for everyone!

Presale tickets are currently available through livenation.com. Tickets go on sale to the public on Friday, April 12 at 10 AM ET through Ticketmaster. Tickets are $39.50 + fees. Admission is free for children twelve and under, up to a limit of two per adult ticket-holder.

For those who can’t make it to Toronto, CBC will also be streaming the festival live at cbcmusic.ca, as well as on Facebook, Twitter, and YouTube.