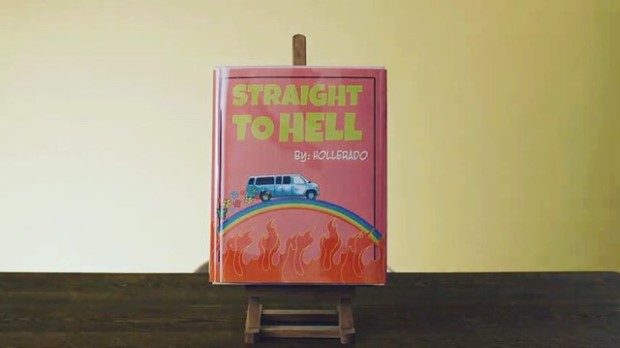 Ottawa indie-pop quartet Hollerado have released a remarkable lyric video for their new song “Straight To Hell” from their forthcoming album, Retaliation Vacation. The song pairs a deceptively simple acoustic melody with straightforward yet profound lyrics, which are illustrated in the video through an elaborate pop-up book. The book, assembled by director Marty MacPherson and colleague Josh Gorle, puts a unique and engaging spin on the idea of a lyric video, making this one a must see!

Retaliation Vacation will be released on June 7, through the band’s own label, Royal Mountain Records, which is also home to acts like PUP and Alvvays. Unfortunately, it seems that the ten track album will be the band’s final release, as they recently announced via Instagram that they would be parting ways after this record:

“After nearly 2000 shows in too many countries to count, the thing we are most grateful for is the friends we made along the way. Still, all adventures have an end and we feel that we have reached ours. And, we wanted to say goodbye by making one last record. It’s the first one we made entirely ourselves (produced, engineered, mixed) and it was a total blast.“

They have also announced a new string of dates around Canada, leading up to an already announced farewell show at the Danforth Music Hall in Toronto on December 13th. That show is already sold out, but you can also catch them at the same venue on December 12th, or at one of the shows listed below, which go on sale Friday, April 19th, at 10AM local time.