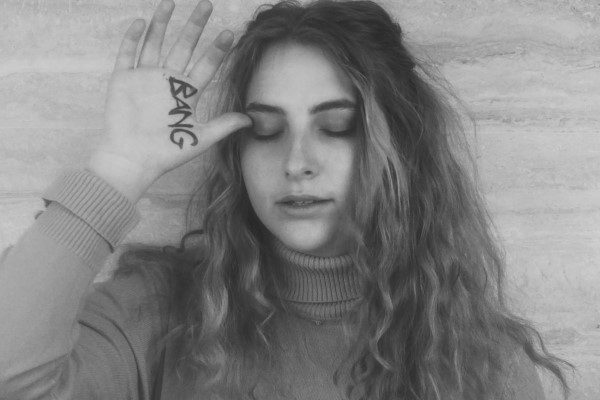 Emerging artist, E.L.F. (aka Emilie Louise Felberg) has released her debut single, “Johnny Got His Gun”. The single, which was produced in Alberta was written by E.L.F. as a form of activism in response to the mass shootings she was watching on the news.

“I was seeing kids my own age going to school and dying. I had empathy for what their friends and family were going through.”

Check out the single below, and find out more about E.L.F. in our Five Questions With segment.

My name is Emilie Louise Feldberg, but I go by E.L.F. I’m a seventeen-year-old musician and aspiring activist, expressing myself through my tunes. I’m from Calgary, Alberta, a place I’m very happy to call home, and I’m currently finishing my final year of high school. I play several instruments, but I rely mostly on the piano, and I am also a piano and voice teacher in the afternoons. I spend my time writing music, playing music, reading articles on the news that inspire music or studying chemistry. I’m definitely an opinionated person, and that’s why most of my songs take shape after large movements, in fact, my next project is all about women speaking up about their experiences with assault. My most recent release is about gun violence. I feel that as teenagers, my generation’s voice is often ignored. We are clumped in with millennials, or the media thinks we’re five-year-olds spending hours on “the iPad”. However, we have an interesting perspective, growing up during times of intense change, the rise of Instagram and Snapchat newsfeeds, and I think this has caused a lot of us to become activists within our own worlds. I definitely want to make a change, and music offered me that opportunity. I’ve been vocal about my beliefs since I was tiny, and at the age of fourteen, I had started a feminism account on Instagram that grew to gain about 30,000 followers. I want to keep being vocal and going through my little teenage life as an outspoken musician and aspiring activist. My interests outside of music and social change are incredibly random and include chemistry, philosophy, spending time with my dogs, contemplating what I’m going to do with my future, and rewatching episodes of tv shows my parents hate on Netflix.

My music is pretty much whatever it needs to be. Whatever the song requires, I give that to it. When my songs reflect my anger, there’s a strong drum lead, a guitar riff. When it’s a love song, there’s only piano and that’s all it needs. These days, I mostly on politically based subjects, I’ve found that is what inspires me the most, and affects me enough to write good music. My writing isn’t always about my personal experiences but always comes from my empathy. Some of my songs will have figurative writing, but my recent single is very straightforward, and I find that when a subject needs clarity, it’s best that the lyrics reflect that. I’m heavily inspired by artists like Fleetwood Mac and Florence and the Machine, the way some musicians are able to almost create their own genre of music within their songs is really impressive to me!

Unless performing at my high school’s fundraiser for the arts counts, then I don’t really have any upcoming shows. It’s a little bit of a challenge to book gigs when you’re still a minor! I’m still on the lookout, though. My live performances are usually a direct representation of who I am as a person. I love performing, but when I’m nervous, I tend to make terrible jokes and then laugh at them (I am usually the only person laughing at them). That being said, once the music starts, I get absolutely immersed in the songs, and I like to take the audience there as well. My live performances should feel like an experience like you’re diving into the instruments. At least, that’s how the musicians feel.

Currently, I have a few songs on my SoundCloud, but only one released on all platforms, Johnny Got His Gun. That is the song I would recommend. Not only does it demonstrate how my writing takes shape and who I am as a musician, but it is absolutely necessary for the current political climate. The song has a strong percussion beat, which is actually the sound of guns being aimed and lowered. It has simple lyrics, but lyrics that are enough. It has electric guitar and mellotron, keyboards and vocal harmonies.  The whole point of recording and releasing this song was to make it a call to action, words to scream and stand behind. Just a few days ago, up to 50 people were killed in the shooting of a Mosque in Christchurch, New Zealand. Though the song references America, it applies to the whole world, even New Zealand and
Canada. If anyone is angry at gun violence and wants change, if anyone is hurt and can’t put the emotions into words, I would give this music a listen. It might help, and it might inspire. That was the point, and I’m really proud of the outcome.

I would have to say Reuben and the Dark, first off. I’ve been in love with this band for four years, and I actually had no clue they were from Calgary! It was awesome to find that out. They do a lot of performing and workshopping in my area, so I’m hoping to be able to see them live at some point. My heart might burst! Another Canadian artist I’m obsessed with is Cœur de Pirate, or Béatrice Martin. My mom is French Canadian, I grew up in francophone schools and French is my native language, so Coeur de Pirate was a really cool way for me to hear both my languages used in music, sometimes even in the same song! She has these awesome lyrics and always modernizes her sound with every new release, so I’m really inspired by her. Every time I listen to one of her songs I’m always tempted to write a song in both English and French. Some honourable mentions are Alanis Morissette, the Weeknd, and Joni Mitchell. Canada has some amazing music!