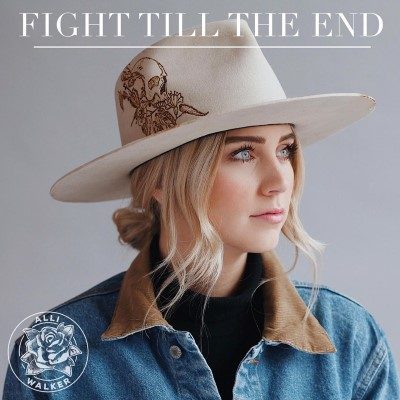 Alli Walker has become one of the newest voices in Canadian country music with the release of her official debut single “Fight Till the End.” Walker is a singer-songwriter and multi-instrumentalist who originally hails from Prince Edward Island. Walker took a chance and moved to Toronto when she was only 19 years old to ‘chase the dream.’ Since her move, Walker now has hundreds of shows played and many songs written. “Fight Till the End” is the initial release from her debut album called The Basement Sessions: What I’ve Learned So Far which will be released in September later this year.

Fight Till the End” is dedicated to those fighting for their lives in any shape or form. Every one of us is affected by someone who has or is currently fighting for their lives,” explained Walker. “I wanted to create an anthem for that, a song that allows each of us to know our own power and be proud of who we are and how far we’ve come.”

Walker has spent the better part of the past decade honing her craft and the message she wanted to share through her music.  Walker spent several years writing music she just didn’t resonate with such as boys, booze and breakups, this helped the PEI native realize that her success depended greatly on being true to herself.

“Once I worked on becoming my most authentic and vulnerable self, I was able to write about what was really going on in my life. This led to the creation of what I call Mindful Music, songs that speak to the struggles of personal development and healing through music.”

“Fight Till the End” will be followed by the release of additional singles; “Sunny Day” and “Raise Your Head.” The singles will lead up to the full album release scheduled for September 13, 2019. The Basement Sessions: What I’ve Learned So Far will bring to life 10 tracks that tell the story of Walker’s personal journey and the work she’s done to prove her drive comes from the desire to touch people’s hearts and change their lives.