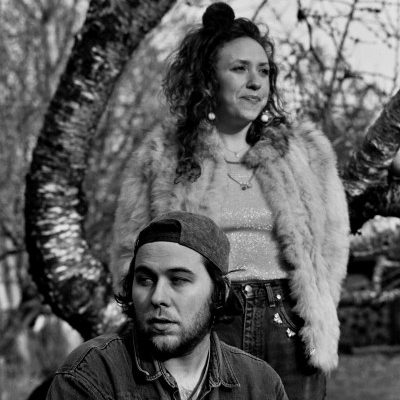 They have also unveiled a video for their single, “Oasis”. The band shares on the video,

“To make the video for Oasis, I overlayed some experimental footage of water and particles with old footage I had of Hush Pup from a music video that never came to fruition. I kept the editing fairly loose, letting the natural light and movement come together organically. I wanted the vibe of the video to resemble more of a dream than a tangible reality.”

Check out the video below and find out more about Hush Pup in our Five Questions With segment.

Hello! We’re Hush Pup. This is Ida. I play synth, sing and write for our band:)

Our friend recently described us as “Fantasy Pop”. We liked that description. We make music that is definitely structured as pop songs but that we hope is textural, celestial, experimental and dancey. We love writing with lots of chordal movement, love funny sounds we come across on old keyboards, and like to create moods. I’m a very visual person, so I feel like the songwriting is most often influenced by something from the visual world interpreted as sound.

Yes! We just released a double cassette in these deadstock cases that look like kid’s audiobooks from the library. It includes our EP “Flower Power” as well as our album “Panacea”. We are doing a tour across Canada from Toronto to Victoria in May to celebrate this release. Our live performance is currently bass, keyboards, vocals, beats, and other tracks. It’s a fun performance I think, we like to wear sunglasses and have a bit of a sense of humour when we play and each has our own vibe. Because of the mood of our music, I think it’s always best when there’s some sort of a trippy light or a projection or something. It brings out the psychedelic quality of our aesthetic. I think that people develop very personal relationships with listening to a band’s recordings and it’s always very cool to get to interpret our own recorded music live.

I would say Body of Work/Ritual off of our EP Flower Power. You kind of get 2 songs in one and it’s one people seem to really get into live.

There are honestly soooooo many. If I could only pick a few though I would say White Poppy, Bernice, Tryal, Ice Cream, Scott Hardware, Beverly Glenn Copeland, Mimico.