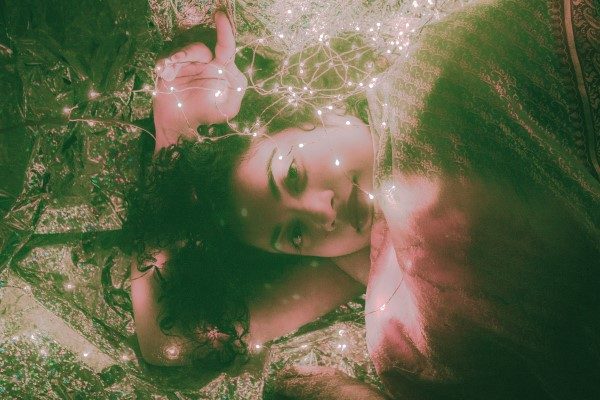 We caught up with Montreal, QC-based sparkling experimental pop artist, Thanya Iyer who will be performing on April 11 in Kingston, ON at the Tavern and also on April 12 at Kazoo! Fest, and then to top it all off April 13 at Wavelength Monthly Music Series. Find out more about Thanya in our Five Questions With segment and if you’re able to catch her live, you definitely should.

Something that I have learned over the years of performing, composing and collaborating is how music has an amazing ability to engage people, create community and provide healing in a deeply therapeutic way. A beautiful thing about collaboration is the combined effect of each person’s individual voice can drastically change and shape a song into something completely new and exciting.

When I write a song or musical idea, it could be a really short verse or a long flushed out arrangement but if it’s something I’m excited about I bring it to the band! Pompey and Daniel!

We play the song in different ways eventually coming to an arrangement that we all love and that speaks to each one of us. However, the real shapes of most of our songs have taken place on tour during the performance, subtly experimenting with melodies and rhythms.

Yes! We’re doing a really exciting series of shows in Ontario this week! Playing April 11th in Kingston, ON at the Tavern, a show organized by the 12CAT arts collective, April 12th at Kazoo! Fest at 10C Shared space and then Wavelength Music Series in Toronto! And I’m so excited to discover and play at this new space, Brothers Dressler and the amazing bands on the bill!

We’re also really excited to do 10 dates in Canada and the U.S. with And the Kids later in April! We’ll be in Ontario again, upstate New York and Maine as well as a really fun stop in Fredericton for Flourish Festival!

What to expect live? Well, there will be lots of new music from our new album which we’ll be playing (some of which you can listen to on our Audiotree Session).

Our sets are also full of improvisation, sometimes within but usually in between songs, collaging them together. If you listen to the Do You Dream? Mixtape (our recent release on top shelf), it’s quite similar to how we play things live. The idea behind that work was to record a snapshot of our live set. We recorded an 18-minute set live which was an improvised collage of 5 different songs and had the MAWMZ choir add some of their beautiful voices to the tracks.

Another fun and super exciting thing to expect live is we added a new band member! Sophie! She does live visual projections along with the music! She won’t be on this tour but her first tour with us will be with And the Kids at the end of April and we are so happy about it!

I would suggest checking out Daydreaming from the “Do you Dream?” Mixtape! But technically if you listen to that whole mixtape all the way through it kind of sounds like one song!

My other fav is I forget to drink water (Balance) from the Audiotree Session.

Favourite Canadian Bands! Soooo many…and so many amazing, amazing friends who are doing such wonderful things in the creative music world right now that my heart is overflowing. But to name a few, Common Holly, Emilie Kahn, Corey Gulkin, Bernice, No Cosmos, Lune Tres Belle, Chiquita Magic, Tamara Sandor! So many more.