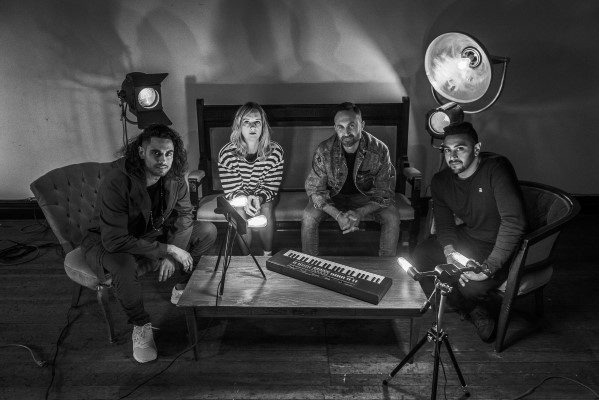 West coast group Delhi 2 Dublin have a busy year ahead of them. The Vancouver-based foursome released a new single, “My People” on March 22, a new album is set for release in the spring of 2019, and a North American tour is in the works. Founding members Tarun Nayar, Sanjay Seran and Ravi Binning came together in 2006 and have been playing with violinist Serena Eades for the past four years. Averaging 100 shows a year in venues ranging from L.A. dispensaries, to high-profile festivals like Glastonbury and Burning Man, Delhi 2 Dublin continues to reach new audiences across North America and abroad with their ever-evolving sound, dubbed “Subcontinental Pop” – listed on their website as a genre that combines both “its deep South Asian roots and its expansive, crazy-fun appeal.”

We caught up with the group to find out more about their career, their sound, and their busy year ahead.

How would you describe the essence of Delhi 2 Dublin?

Sanjay: Would love to say sex, drugs and rock n roll but I think it’s more like magic love connection, which is also pretty rad, definitely a vibe.

Tarun, when you created Beats without Borders, what skills or techniques were you able to bring from your time being mentored in India?

Tarun: My time studying tabla in India in my 20’s really coloured the rest of my musical life. It deepened my understanding of the drums that I had been learning since childhood – and living in Mumbai opened me up to the hidden and vibrant early stages of the underground electronic music scene in India. Returning to Canada, some of that inspiration made its way into the formation of Beats Without Borders – and our mission to bring global sounds to club nights in Vancouver.

Your list of venues is probably one of the most eclectic I’ve heard in some time – what place sits at the top of your bucket list as a group?

Sanjay: The Fillmore in San Francisco – we’ve already played this venue but we really want to sell it out to get our poster on the wall, yes we want that! Also, The Danforth Music Hall.

Tell us about the energy behind the new album We Got This. What was the process like creating these songs?

Sanjay: Initially we had been writing songs for about a year without any sort of clear focus. It was kind of like we were seeing where the process was going to lead us, hoping that the bigger theme would find us. We set out to write an album that would to speak to some of the things we were feeling as Canadian born kids to immigrant parents and to create something that put us outside of our comfort zone but yet still do it in a way that was true to Delhi 2 Dublin. We wanted to create the feelings of hope and love and not focus on the ugly shit. Songs like “We Got This”, “Home” and “My People” were direct results of that. The process all rounded out once we started working with our producer Gavin Brown and his team. They just got it and no joke, it was such a positive experience – strange at times but mostly magical.

On top of the album release, you have some North American shows lined up – what’s the vibe like at a Delhi 2 Dublin show? What can first-timers expect?

Sanjay: The energy at our shows is pretty hype, I mean we have a beast of a Dhol player that’s like a freight train when he plays, and our electronic-sound-system-party-rock type background sets the vibe. We like to create a sweaty dance party rather than a concert.

What do you hope for as a group going forward? Where do you see yourselves in the next few years?

Sanjay: Right now we are hoping that this new album takes us to new places and leads us to new experiences. Sounds kind of cliché but we were starting to get tired of the status quo and intentionally set out to write an album that would teach us some new things and make us grow. Hoping that the next few years brings us some of the best touring we’ve ever done and hopefully we get to follow up on We Got This.