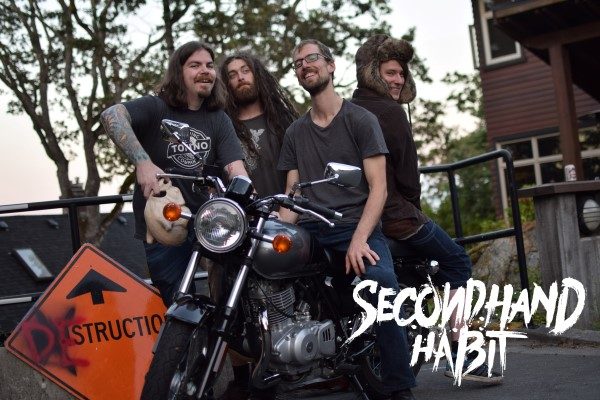 Secondhand Habit is a high voltage rock band who got their start back in 2010 in Victoria, British Columbia – but their most recent incarnation happened just a few years back in 2016. When it comes to describing their style, Jon (guitar), Jesse (guitar/vox), Skyler (drums) and Levi (bass), don’t really like to put themselves in a particular category. They like to pull influence from a lot of different musical styles and incorporate them in different ways when writing their songs.

And while their musical tastes include Priestess, Audioslave, and Zeppelin to name a few, their non-musical influence is surprising, but not absolutely crazy.

“The Avengers,” band member Jon states. They’re “a group of people working together to become something greater than they are individually”. Any great band dynamic starts with realizing it takes more than one person to create something great.

Over the years they have had band members come and go, but each of them brought their own uniqueness to the band and to the music they played. When they first started out it was more along the lines of a comedic alternative rock band with funky bass parts. They gradually moved towards more of a classic rock influence mixed with some modern rock and grunge before they finally ended up to where they are now. Keeping with the Avengers theming, they became more in sync with each other while playing.

It’s not all rainbows and roses, however. They too face the same obstacles many other bands face when trying to get their names out there. With oversaturation in the music industry being a primary issue, they sometimes struggle with standing out in the crowd. And with Canada being so widespread, touring is sometimes becomes an issue due to the long travel days and price of gas!

But still, they trudge on, writing, performing and growing as a band and as individuals. They hope to continue with creating new music, releasing more songs and getting their names out there until the snowball effect comes into place and everything else that goes along with it.

In the meantime, their fans and fans-to-be can always find them on streaming outlets like Spotify, GooglePlay, Bandcamp and iTunes. Or they can check out their social media handles to keep up-to-date with anything new and exciting!