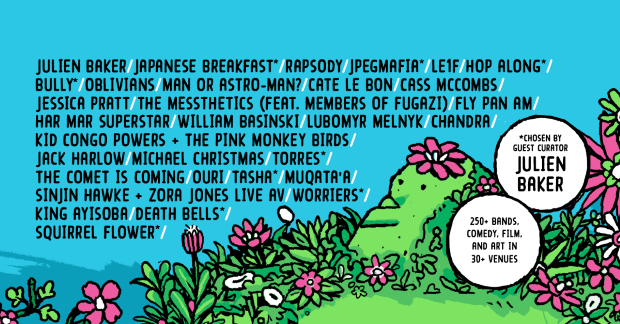 The second wave of Sled Island 2019 artists has arrived! With something for everyone, this diverse selection features both local and international artists spanning a wide array of genres. Check out our first write-up HERE.

The 13th year has already announced names such as Julien Baker, Fly Pan AM, Sinjin Hawke + Zora Jones, Kid Congo Powers and The Pink Monkey Birds and The Comet is Coming.

The second wave is up on the official site and as promised kicking off my top 5 picks from this wave is Rapsody. Travelling from Snowhill, NC grew her fame in 2011 when her mixtape For Everything attracted Kendrick Lamar for a feature. Being one of six women to be nominated for a Grammy in Best Rap Album. Working with large names in the rap-genre, Rapsody combines cheeky wordplay and stoned-faced directness to bring more life to her music.

Next on the list is Calgary’s one and only Melted Mirror. Whom recently released their first studio album Past Life. Melted Mirror mix goth-pop with synth-punk. The fusion of dance music and heavier stylized vocals brings movement from everyone watching them.

Third on the list is Ian Blurton’s Future Now. Residing in Toronto and bringing backing music stylings from members of Blue Rodeo, Daniel Romano and Randy Bachman’s bands. With such a diverse lineup the band’s music stylings seem to range fans of various rock genres; from stoner to garage there is something for everyone.

Sled Island brings not only local or national artists but welcomes any genre from across oceans. So next on the list is one that not many indie fans would be familiar with. Coming from Seoul, South Korea is numnum. This Korean band was large in the ’90s indie scene. The trio makes high-intense pop music with jerky post-punk vocals. If you end up hitting at least one out of country band make sure to have this one on the list.

The top pick for this wave’s announcements is one that I personally have seen numerous times and have never been disappointed. EXITS hailing from Edmonton brings a classic hardcore-punk sound without the stereotypical macho looks of the genre. If you need something rowdy or just to mosh out your frustrations this bands for you.

Within the months to come there will be many more announcements of artists appearing this year, so stay tuned. You can follow and check out the entire lineup on the website or check out their Spotify playlists.

Stay tuned as I will also be announcing must-sees with each wave of artists announced.

Related ItemsAlbertaCalgary ABFestivalInternationalLocalMusic FestivalNewsSled Island
← Previous Story Osheaga has started releasing some of its 2019 artists!
Next Story → The full lineup for Osheaga 2019 is out!