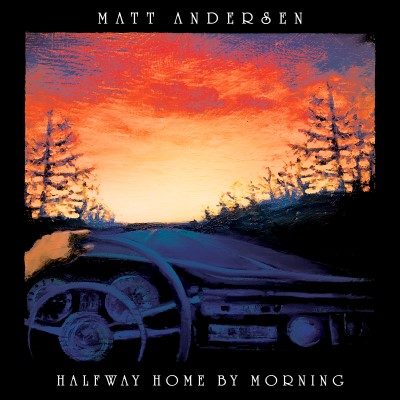 New Brunswick Blues/Soul powerhouse Matt Andersen released his tenth full-length album on March 22, via True North Records. The album was recorded live off the floor in the historical Nashville, Tennessee, adding to the full-bodied sound that Andersen has become known for. The thirteen track release shows off the talent of every musician involved. “You can’t fake the vibe of musicians playing together, responding to the choices others are making in that moment,” says Andersen on the live recording style of the album.

There were a plentiful amount of musicians involved in Halfway Home by Morning, including Steve Dawson, Jay Bellerose, Chris Gestrin, Amy Helm, The McCrary Sisters, Jim Hoke, Charles Rose and Steve Hermann. The album leaves the listener feeling as if Andersen has bared his entire soul and poured his essence into each and every song, like most, if not all, of his previous releases. The album starts off strong with “What Would Your Mama Say”, bringing the standard slower vibe of most blues songs and beautiful harmonies throughout the song. “Something to Lose”, which features Amy Helm, is almost ballad-like. It starts off slow and relaxed, simple backing music paired with Andersen and Helm’s voices complimenting each other wonderfully. “Gasoline” starts off heavily featuring a horns section with one of the quicker beats of the album. It’s definitely a song you can’t help but at least tap your foot along to. “Been My Last” is another soft, ballad-esque song. Andersen uses the softer end of his vocal range with an acoustic guitar to tell a story about a love that may not have happened, but if it had, it wouldn’t have ended, as the title suggests. It’s a refreshing change from the pace of the rest of the album and allows the listener to see a different side to his music. The album closes with another slower song, “Quarter on the Ground (A Song for Uncle Joe)” but unlike the softer “Been My Last”, it embraces the church choir-like backing vocals featured throughout the album.

Recording the album live was most definitely the right call for Halfway Home by Morning. It gives it such an authentic vibe and makes the listener feel as if they’re somewhere in the southern states with the amazing choir harmonies. This album shows that the older style of Blues is still going strong and won’t be disappearing any time soon. Halfway Home by Morning is sure to continue Andersen’s massive success.