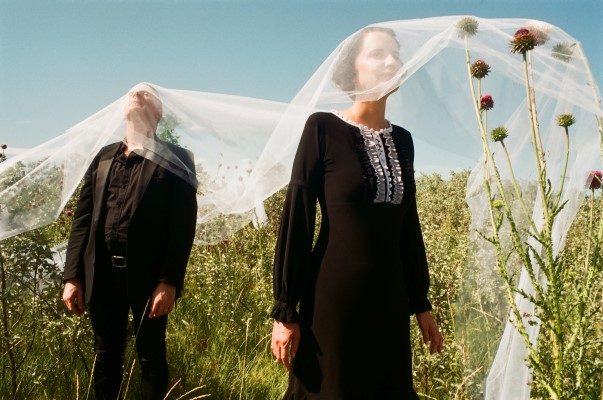 Edmonton, AB-based duo, F&M is taking their Lessons From Losers on the road in March & April, and have just released a video for their newest single, “Council of Misery”.

“He loved the psychedelic-rock sound of the song and decided to play that up visually,” says singer/multi-instrumentalist Rebecca Anderson. “In the video, we’re lost and wandering incognito. Are we hiding from something? Are we running from something? The visuals also make me feel that we are insignificant in the big picture. There are many close-ups and swirls into the flowers, which seems to have their own little universe happening. It’s a very trippy journey.”

“I heard the words ‘Enter the council of misery’ on a TV show (I think it was Vikings) and burst out laughing,” says Rebecca. “I guess that phrase stuck with me. The idea of confronting a tangible council of misery is quite absurd, but it felt empowering, and so I let myself go down that rabbit hole. There are many things that keep us from attempting our dreams, and that’s what the council is. Sometimes it’s the fear of failure, the inability to try because of our inhibitions or because of the judgment of others. The ‘council’ comes from within us and from without.”

“The song always like a psychedelic black metal song to me, which we love, but is generally out of our wheelhouse. I love the song, it’s one of my favourites Rebecca has written for F&M. adds Ryan.

Check out the video below and find out more about F&M in our newest segment of Five Questions With.

Rebecca: F&M is both Ryan and I as songwriters so the style can be eclectic and we rely on each other to create and to shape each other’s individual offerings into what becomes an F&M song. This means we do a lot of our first drafts of songs independently and then bring them together to tweak and shape. I think we both like to leave lots of room for the songs to breathe. I love to write on different instruments (accordion, keys, or guitar) as each one has a very different voice. They are like different countries for the songs to be borne out of and I never quite know where they will lead me. It’s really about being open to, for lack of a better word, to the muse. Film, visual art, and literature are all important factors in the process. My background is in history and cultural studies, so I love to delve into perhaps obscure cultural things. I want to know more about human experiences and distill those understandings and reflections into music.

Ryan: I like to think we fall into a folk-noir genre. We proudly wear our influences on our sleeves from Leonard Cohen, Nick Cave, PJ Harvey, Tindersticks, Kate Bush, classical music to circus and cabaret music. I often suggest we’re like a tiny dark lit wine bar, we’re not for everyone. For those that prefer the dark little wine bar, they REALLY like that wine bar… we’re that.

Further dates to be announced for summer.

Rebecca: I loved what Edmonton’s Gig City said about us a few years ago, that F&M has “a devilish intensity to [our] work, deftly combining folk music with a vibe that simultaneously engenders the feeling of vaudeville and a symphony orchestra performance.” Ryan and I love theatre and always aim to put on a show that is bigger than ourselves. We just want you to feel something.

Ryan: We want you to cry, laugh, bob your head and most of all be transported from your miserable lives to someplace like Paris or that wine bar I discussed above.

Rebecca: That’s a difficult one! Each album is very different (we have six now). We don’t always sing together on each song, but I feel a duet song would have to be the choice so listeners can hear both Ryan and I. I really love “And We Will Mend Our Broken Hearts” from our 2014 album At Sunset We Sing. It was heavily influenced by Portuguese Fado music, and I think it gives the listeners a taste of what to expect in our live performance, as many of our songs have a bit of a European feel to them. If I could give a second song, I would say “Lessons From Losers” — our current title track from our newest album. It’s what we are living these days and I love singing this one with Ryan on stage.

Rebecca: Longtime Canadian inspirations are Lhasa De Sela and Leonard Cohen. Current faves on the Canadian scene are nêhiyawak, Foonyap, Jom Comyn, Eamon McGrath, and Ariane Mahrÿke Lemire. Each of these artists fearlessly does their own style.