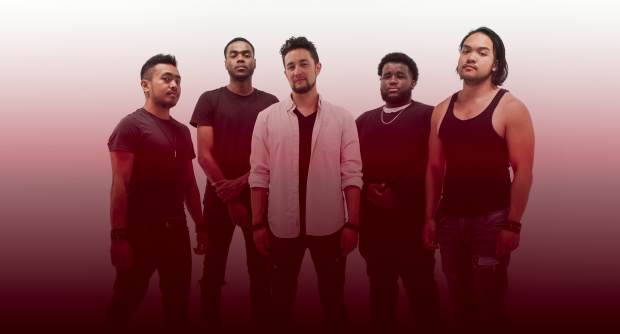 Toronto, ON-based band KOZEN has released a video for their newest single, “To The Wind“. The single is the first off of the band’s upcoming album, A Fearful Wonder, set for release in June.

We caught up with the band to chat about the single, upcoming album, and more! Check out the video below and find out more about KOZEN.

We’re KOZEN, a band from Toronto, Canada, and we love genre fusion, learning how to become better people and shawarma.

You have just released your brand new single, “To The Wind”, care to tell us a bit about the writing process behind this track?

This might have been one of the most difficult songs we’ve ever written based on the sheer number of disagreements we had about what direction it would go in. Our lead guitarist (Jericho) and drummer (Jared) came up with the first version of the song, which was initially a minute and a half longer than the final version, with entire sections that we ended up cutting out. Lyrically we had a clear direction of where we wanted to go, but stylistically we jumped all over the place. We started with a basic guitar and drum demo, which began to evolve as our keyboardist added a bunch of unexpected harmonic changes to the song which forced us to rewrite a few things, and we changed our minds a number of times regarding how keyboards and electronics would factor into the song. Vocals added a lot of identity to the song but also complicated the process. We didn’t know if we would include any screaming vocals at all and how they would sound if we did include them.

What we ended up with what I’d call the most “pop” song on the record, which happens to also feature some elements of funk, a handful of screaming vocals, falsetto singing, a blast beat, and an extended “djent” breakdown.

That was honestly a really hard shoot day. Once we started going it was an almost non-stop process, with the only real breaks being during other band members individual shots, and in that respect, it was quite tiring. I couldn’t even turn my neck properly for a few days after because of the constant day-long headbanging. But I think the highlight of the shoot was working with Matt Hamilton (The Trenches Media Inc.). He brought so much creative vision and clarity to the whole project and really helped us bring the concept of the video to life in a way that was fun for us, actually communicated what we wanted to, and managed to execute it with simplicity.

The single is from your upcoming album, A Fearful Wonder which is set for release in June, what made you choose this track as the first single release?

There were a number of factors, but it seemed to be a consensus within not only the band members but also any of our close friends and collaborators who were hearing the material as we worked on it. To The Wind just ended up having that hook-laden quality that good singles need to have. I think it’s also a good choice as a representation of the whole album since it kind of sits in the middle of all the different influences that show up throughout the tracklist. This song is the best summary statement of who we are and what this current incarnation of the band sounds like.

It really depends on what particular kind of writing we’re dealing with. I know all of us draw huge inspiration from other musicians and from the instruments themselves when we’re writing the musical parts. Music theory has become increasingly important, especially during the creation of this album, so I think that’s another factor inspiring some of our compositional choices. I’ve been watching a lot of Adam Neely and Rick Beato videos on YouTube, so that has been a huge influence on me. In terms of lyrics, everything kind of filters through my life experiences and beliefs, but the starting point for that process can vary. For example, on this record, there are a few songs that Jericho (guitar) wrote the music for where he also pitched the lyrical concept and maybe a few phrases or lines, and I had to expand it from there and figure out how I could connect to his concepts on a personal emotional level. He and I actually met in a philosophy class, which I think is another element that ended up shaping the way I approached lyrical themes on this album more philosophically.

Can fans expect a tour to be announced around the release?

Not necessarily a full tour. There will for sure be a release show and perhaps a handful of shows. Beyond that, it’s hard to say right now, but stay tuned to our social media and we will keep everyone posted!

There are a number of you whose names consistently pop up in our notifications when we post new content on social media. We really value that. Those few consistent people who are always showing support and appreciation, it means the world to a young band like us. So thank you for being awesome and for giving us a reason to put in the work we do to create this music! We hope that the new album is an adequate “thank you” to those who have continuously believed in us over the last few years.