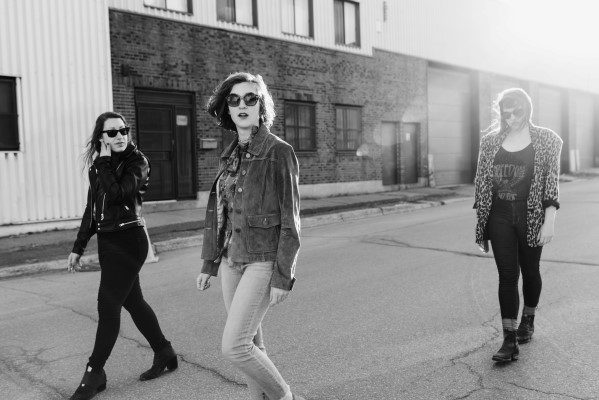 Montreal, QC-based trio, Wild Mercury is made up of Anne Lauzière (vocals/ guitar), Gabrièle Côté-LeBreux (vocals/ drums), and Marie-Pier Lavallée (vocals/ bass). The band recently released their single, “Calling Me”, so take a few moments and check out the single below, and while you’re at it, find out more about Wild Mercury in our newest segment of Five Questions With!

We are a trio of women that originally wanted to start a folk group focusing on warm vocal harmonies. One thing led to another, we discovered that we had the fever for rock, for grounded sounds, and that we were driven by the unfulfilled dream of a riotous youth. Better late than never. Since 2017, we played on the sticky scene of many Montreal’s bars, unveiling our style and our sound.

Our songwriting and our music are sometimes sarcastic, sometimes angry, sometimes euphoric, sometimes pop, sometimes rock, sometimes soul and sometimes folk. Each of us have so many different influences in music and it’s motivating to include a part of everyone in the songs. We feel it’s a way to touch more people with the music we create. Usually, someone brings the skeleton of a song and each member adds flavour to them.

We will play at L’Escogriffe in Montreal, Friday, March 29th for Equinox, a new music festival that promotes and supports women in music. We will also hit the road for a mini-tour of Quebec we organised with our friends Les Shirley at the beginning of May. We will pass through Quebec City, Sherbrooke, Montreal and Sorel. It will be our first road experience together as a trio and we are looking forward to it. We’ll also pass by Toronto in May because we’ve been accepted at CMW.

Our live performance gives a really good idea of the passion we have for what we do and of the love we have for one another. We hope that it musically translates to the people in the crowd.

We are really proud of the studio work that we did for our latest single “Calling Me”. It tells the constant fight that comes with the addiction to cigarettes. It can relate to a lot of other things really; this feeling of being trapped in an unhealthy relationship with something or someone. Musically we wanted to express both sides of it, combining loud dynamics to a sexy vocal delivery and witchy harmonies.