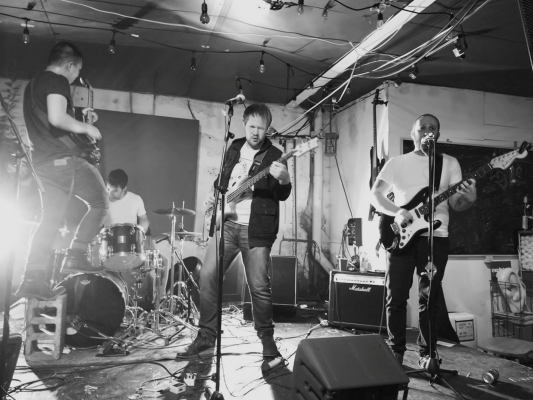 Montreal, QC-based grunge band, Horse Doctor has released their single, “Pious” on March 8, we caught up with them for our newest segment of Five Questions With, and you definitely want to check it out. This band is one to watch.

Check out their single below and keep up to date with all things Horse Doctor via their socials, as they have an album dropping soon!

We are Horse Doctor. We are a band composed of three Neuroscientists and a recording engineer. We like to argue over the details of music until it drives us into a cathartic frenzy, and we call that frenzy Horse Doctor.

We play rock music that is loud and melodic – the product of early grunge, 2000’s indie, and a splash of emo influences. Sometimes we are stylized and purposefully anachronistic, other times we like to throw some knuckleballs. We’re pretty invested in song structure and composition.

We used to have one member bring songs in, and then we’d of kind gnarl, warp and saw them into a Horse Doctor mould. Over the last year, we’ve had a much more organic approach where we let songs emerge naturally through jamming… and then we gnarl and warp them.

Two of our members have sold their souls to become corporate drones and their overlords have taken them out of Montreal, so we are transitioning into being a studio band for the time being. This works because we own our own studio. We’re still making music actively and don’t plan to stop.

Our shows are a carefully controlled cacophony interspersed with quiet lullabies. We barely hold on enough to play the notes during loud parts, and then fall into creepy dazes during the softer bits. The audience generally responds with enthusiasm and sheepish stares. Our guitarist, Binh, has some great moves, and great calves to boot.

Our brand new hit single, Pious. It’s the first song off our self-titled album, coming out in April.

Between The Bog and other shows we get to see a lot of cool Canadian bands. Smokes, Heathers, Boy Friends, Future Peers, Casper Skulls, Lonely Parade, Blessed, GG Peach, Dead Soft, The Effens, JŪNO, Marée Noire, Frigs, and Fake Palms are a few that have made an impact.