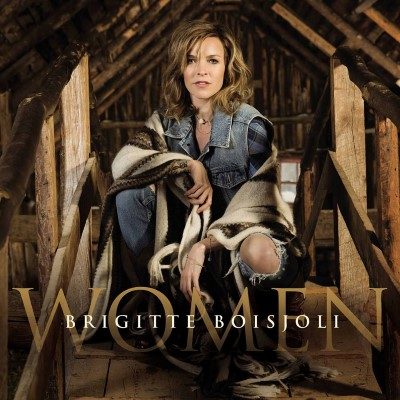 Brigitte Boisjoli has officially released her latest studio album appropriately titled, Women. The album is now available instore and online. Women celebrates the music and legacies of some of the greatest female country artists of all time. From country legends such as Loretta Lynn to Brenda Lee, Boisjoli takes some of their most iconic hit songs adds her own unique flair and spin on these classic tunes. Over three and a half years have passed since the release of Patsy Cline. The album, which earned gold status in sales and introduced Boisjoli into the world of country music is still one of the bestselling albums of her career.

The album kicks off with Loretta Lynn’s 1971 hit song “You’re Lookin’ At Country.” Lynn is hands down one of the most beloved artists in country music, and when it comes to her music you don’t want to mess around with it. Lynn is still around creating music today and is one fierce artist. Boisjoli tackles the song with ease and keeps it close to the original arrangement.

The mega-hit “Stand by Your Man” is undeniably one of the most widely recognized country songs to date. Released by Tammy Wynette in 1968 the song has been played, covered, and mentioned by almost every artist or member of the country music world. Boisjoli channels the style of Tammy Wynette and brings her strong voice to the front of this track.

One of the final songs recorded by Patsy Cline just before her untimely death in 1963 was “He Called Me Baby.” The song was released in 1964 after Cline’s death and became her final Top 40 hit until 1980. Though it was not included on the Patsy Cline album, Boisjoli found a special place for this great song on Women. Boisjoli explains just how much the song means to her; “It’s one of the most beautiful ballads I’ve ever sung in my life. It is an important song since it is one of the last that was recorded by Patsy Cline as part of the last recording session, carried out just one month before her tragic death.”

Boisjoli also incorporated other songs such as “Break It to Me Gently” which was a hit for Brenda Lee in 1962, “Stupid Cupid” which was a 1958 success for Connie Francis, and Wanda Jackson’s “Mean, Mean Man” from her 1958 album release onto the album. Boisjoli stayed true to the original identities of each artist and each song and treated them with respect. With double servings of Lynn, Lee, and Jackson the album also includes hits such as “The End of the World” by Skeeter Davis from 1962, and “The Tennessee Waltz” by Patti Page from 1950. Together they round out the collection of songs on Women.

When it came time to listen to Boisjoli perform “Rose Garden” on the album you could tell how special this music is to Boisjoli. Lynn Anderson had extreme success with the song in 1970 and it is still one of my favorite country songs to listen to. Boisjoli took the time to create a new arrangement for this song and turn it into a beautiful ballad. I love the way it was arranged and the setting that was created around this song. It shows the beauty that the lyrics hold, and Boisjoli performs this song so well. The new version is one of my favorites on the album and one I definitely kept replaying and added to my country playlists.

Boisjoli no doubt incorporates her own personal touch on this repertoire of classic country music. Boisjoli approaches each song with sensitivity and passion to develop her poignant new recordings of these songs. As a huge fan of classic country, I tend to be pretty particular about new versions of country classics. I give Women my personal nod of approval.

Women will also be available as a deluxe version, in a limited edition run. The limited edition version of the album will include the 12 new tracks and offer five bonus songs which were recorded live during Boisjoli’s show Patsy Cline which was presented on September 21, 2016, at Théâtre St-Denis in Montreal, QC.

On May 1, 2019, Boisjoli will celebrate her 10-year career as an artist on the Fifth Stage at Place des Arts in Montreal, QC with the show 10 ans de carrière… Sans regret! The show will celebrate Boisjoli’s career including her successful 2014 album Sans regret. This will be a unique event for one evening only, during which she will be accompanied by many guest artists.

Looking ahead already to 2020, Boisjoli plans to bring Women to the stage to deliver this new music directly to her fans. This tour will be presented in partnership with the Western Festival of St-Tite.